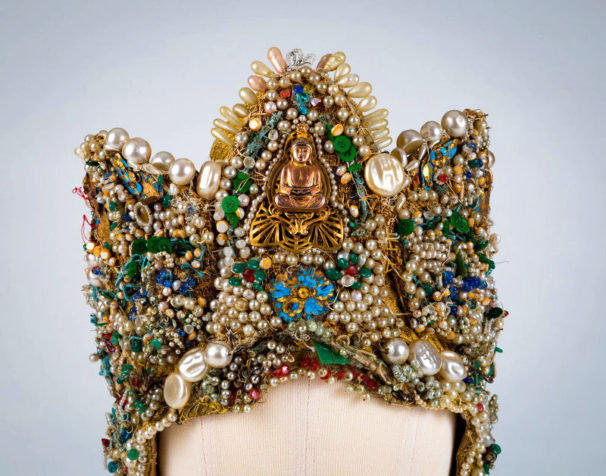 Dance writer Gia Kourlas writes in the New York Times about an exhibit of 30  costumes worn by Denishawn dancers under the aegis of Ruth St. Denis and Ted Shawn. The costumes, as well as other collateral, were long stored in trunks at Jacob’s Pillow. Several were at UCLA, ostensibly in the Collection of Ruth St. Denis which is archived there.

The modern dance tree has abundant roots, and two of its thickest and oldest belong to Ruth St. Denis and Ted Shawn. Their Denishawn company and school in Los Angeles, which lasted from 1914 to ’29, toured the world with a new spirit of dance — barefoot and weighted, exotic and spiritual. They were celebrities of their day. Their costumes were often extravagant and the opposite of Coco Chanel’s dictum: “Before you leave the house, look in the mirror and take one thing off.” That was the cue, at least for St. Denis, to add another bauble.

Fascinating to see this heavily beaded headdress. Jack Cole, who danced in the company’s final years, was handy with a needle as well. Our friend in Los Angeles, the Hollywood choreographer Miriam Nelson, remembered Cole in an interview. “Going by his dressing room, the door was open,” Miriam told me. “And he was always sewing more beads on his costume.”