A difficult word in its strongest use @ Filmforum screening 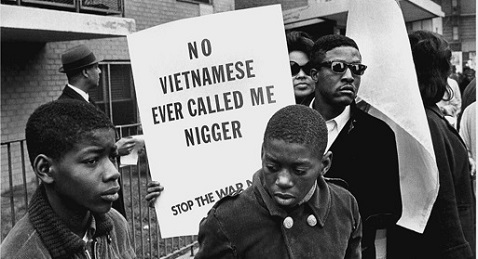 Continuing its screening series 1968: Visions of Possibilities, Los Angeles Filmforum presents No Vietnamese Ever Called Me N****r, a movie with a ruthless title.Directed by labor organizer and New York Times typesetter David Weiss, this film spotlights African-American responses to the Vietnam War through street interviews captured during the April 15, 1967 march of the  Spring Mobilization Committee to End the War in Vietnam in New York City. The city-wide protest march, culminating at the United Nations, attracted over half a million participants including Martin Luther King, Jr., Harry Belafonte, Dr. Benjamin Spock, and Stokely Carmichael. Interwoven among the protest footage is an interview with three black veterans, recently returned from Vietnam in 1968.

On a related subject, every person who lives in Los Angeles, particularly anyone who lived through the 1992 riots, needs to see Burn Motherf*cker, Burn! on Showtime. Must viewing for Angelenos and beyond.

Not from the Filmforum movie, but powerful viewing:

No Vietnamese Ever Called Me N****r | 1968: Visions of Possibilities |  Los Angeles Filmforum | Spielberg Theatre at the Egyptian | July 1