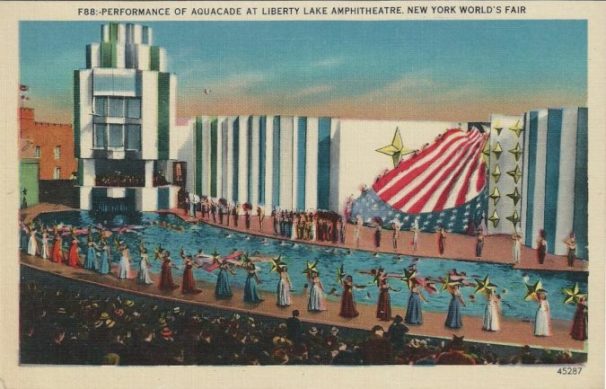 From an interview with Jack Cole dancers George and Ethel Martin available on sound recording at the New York Public Library for the Performing Arts, Ethel Martin shares memories of working in impresario Billy Rose‘s famed Aquacade revue at the 1939 World’s Fair.

Martin found a way to double her income by performing both as a dancing showgirl and a swimming showgirl. She reminisces here:

Billy Rose came along and he said, “I’m going to do the Aquacade. I can promise you a year’s work. Do you want it?”

Well, I wanted to get out of living at home so hard, for other reasons, and I said, “Oh boy, I’m going to do this.” And I then had some money and the security to get my own apartment [in Sunnyside Queens].

We worked very hard for $40 a week [with the Aquacade].

Every day — in the rain, in the everything. I made more money, because suddenly, for some reason, I could swim. Nobody taught me, but I could really swim. He had sets of dancers and sets of Aquacade swimmers. So I went and I said, “If I can be the last one to jump into the pool, I can do it.”

They used to wait in the wings. I had my bathing suit underneath my costume, and I finished the dancing — such as it was — and jumped in the pool. So I made double money. I was very thrilled that I was so self-sufficient and so rich. My own apartment. That was the ’39 World’s Fair. Bob Alton was the choreographer on that. John Murray Anderson was the director.

George: Helen Gallagher’s name was there.

Ethel: “Really? I never knew. Well, Helen Gallagher at that time was nobody. Like I was nobody. So either she was one of the twenty-four girls that I got to know or she wasn’t.

George: The Fair ran two years. Did you stay both years?

Ethel: Yes. Maybe not the whole time the second year, but yes. Billy was not very nice. And we were sold down the river. We went on strike.

Sophie Tucker was the arbitrator. But they didn’t do an awful lot for us, and Billy was saying terrible things like, “Well, any of you girls that needs five bucks, you know ….”  For an abortion he meant. “You just come to me. Why didn’t you just come to me? Why did you have to go on strike?”

See, he’d say these terrible things, and I’m going to tell you, these kids, all during the rehearsal period, some of them came in with an apple. Everybody was so broke. I was okay, for some reason. I didn’t have a lot, but I had a sandwich and a piece of fruit and I held together. But I saw kids, you know, going through that. 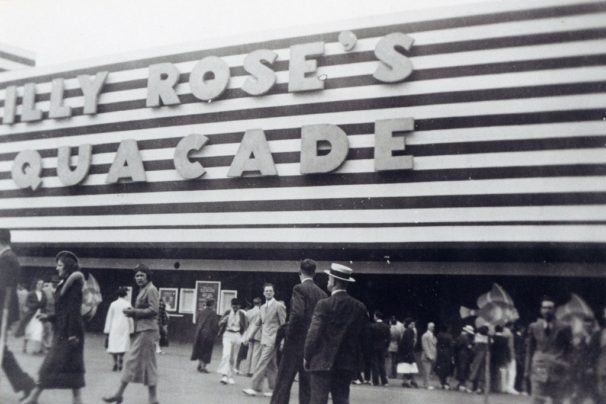 And John Murray Anderson was the overall director of it. I got to know John Murray then, and then years later he did an Esther Williams picture and he gave me a job, swimming in that picture. Her first one, I think it was.

George: It was a black and white film, I think it was the first one.

Ethel: All I remember is that we were swimming in gas jets that went up. We were in and out of these big gas jets. I learned all those tricks. You put the knee and you put one leg up and that makes you sink. So all the legs were up in either a circle or a semicircle, and you’d go sinking down to the ground and then you’d come up this way [head arched back] and then your hair would go back nicely and you’d come up. 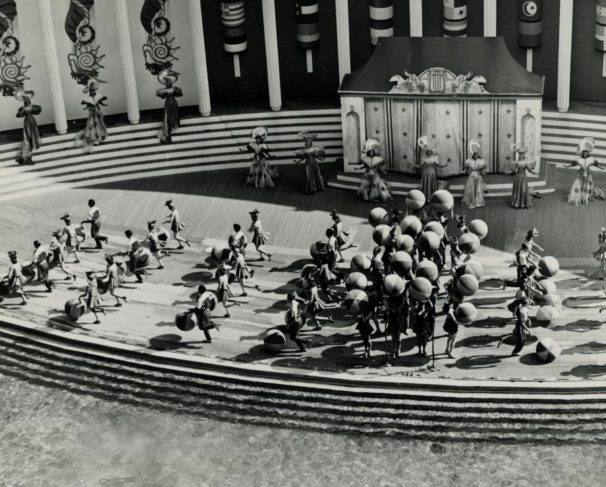