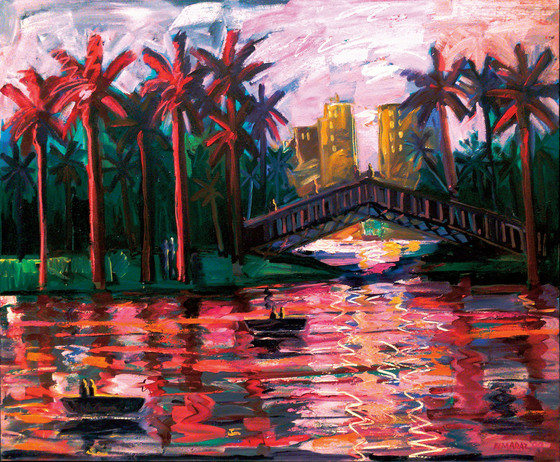 The ‘Los Four’ exhibition at Los Angeles County Art Museum in 1974 put the local art establishment on notice that a thriving scene was taking place in East Los Angeles and elsewhere in the Southland. The Chicano art renaissance was represented by four artists — Carlos Almaraz, Beto de la Rocha, Frank Romero and Gilbert Luján — showing individual work and a few collaborative pieces. The utterly fearless use of color — pastel pinks and violets swimming in hot orange and green areas — was just one of the revelations.

Born in Mexico and raised largely in L.A., Almaraz (1941-1989) was one of the first artists to claim Chicano identity. His work looked at life in L.A. through kaleidoscopic lenses of magical realism that channeled history, mysticism, the subconscious, allegories, Catholicism, art history, symbolism, memory, erotica, overlapping time, politics, internal struggle, identity, and ecstatic experience. A shooting star in scraggly beard and painting togs, Almaraz lived life on the edge and was felled by the AIDS plague. 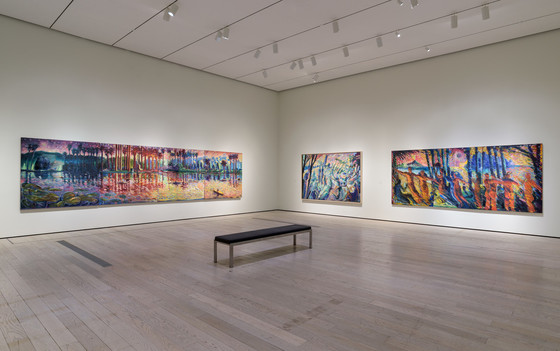 LACMA gathers 65 pieces for ‘Playing With Fire: Paintings by Carlos Almaraz.’ Though not a comprehensive retrospective, it’s the first full-scale Almaraz show anywhere, and it’s about time. His depictions were often stylized and simplified but watch who you’re calling naive pal. He was a master of hallucinatory compositions that grouped buildings, magicians, angels and demons, nudes and animals, ghostly apparitions and ancestral figures, vintage automobiles, the sexual and the spiritual — all together in the same electric picture plane. 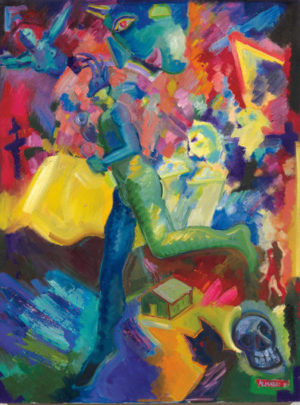 The passing years have only enlarged the enduring vitality of Almaraz’s oil paintings and pastels. They are alive with movement, imposing scale, bold color relationships, daring temperature juxtapositions, thick impastos and painterly kinetics. Almaraz was an improviser: dragging a brush loaded with several different colors and shades across a canvas just to see what would happen.

Chicano mystic Carlos Castaneda would have identified Echo Park as Almaraz’s power spot. With its copious palm trees, changing light, reflective surfaces and his personal history, it was made for him. Monet rendered haystacks for color and light variations; Almaraz painted the park at many different times of day and night.

The four-part Echo Park Lake combine stuns and seduces in the same way that a panoramic Monet waterscape envelopes a viewer. Each panel connects to the other three but the light changes and, therefore, so does the color. Palm trees shiver stoically in deep blues of the first panel, and blaze like Roman candles in the second. A small bride and groom on the far shore are newly married but they stand apart and alone. Other figures in the boats and on the walking path interact; as the park’s reputation for drug dealing and furtive sex add a layer of speculation and mystery to the scene. Incredibly, this is the first time that all four paintings — owned by different collectors — have been publicly shown together. 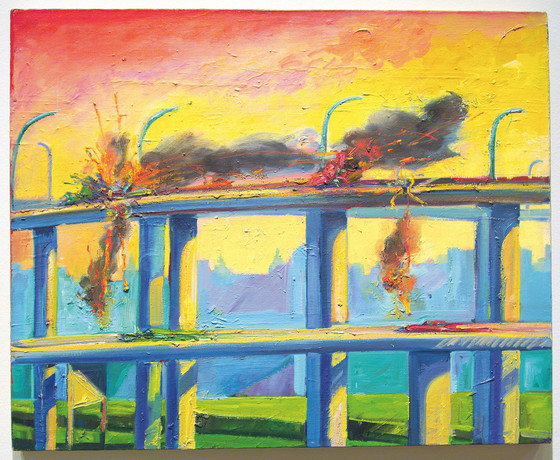 Late work is represented by Almaraz’s car crash series. Skies and landscapes are relatively placid, anchored and girded by concrete trellises and roadways. But cars hurtle into each other and explode into horribly exciting cataclysm. As the waterlilies of the Echo Park opus tip the Almaraz cap to Monet and Starry Night, Echo Park reveals a debt to Van Gogh, so too can the muted pastel geometry of Richard Diebekorn’s Ocean Park paintings be discerned in how the Almaraz freeway overpasses apportion the spaces. The order of the setting is shattered by human tragedy — a useful enough metaphor for an artist grappling with his own demons.

If you know the Almaraz canon, go say hello to an old love. If his work is new to you, go and be amazed.

Playing With Fire: Paintings by Carlos Almaraz | LACMA | thru Dec 3