Gypsy dancer shop-talk at the Academy 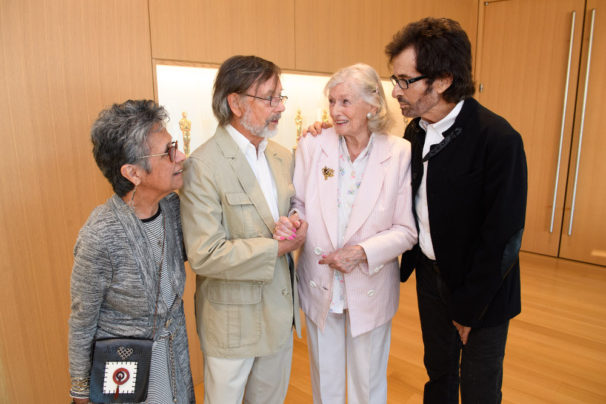 PausePlayPlayPrev|Next
It was a night of dance chatter at the Academy of Motion Picture Arts & Sciences. A highly vaunted circle, including veteran gypsy dancers, a choreographer for the camera, and an Oscar-winning actor, gathered at AMPAS prior to a screening of “West Side Story” Monday July 18, 2016.

In the photo, Maria Jimenez, who danced as a Sharks girl in the movie; Bobby Banas, a Jets gang member (and a great gypsy dancer: “The trouble is he’s crazy!” sings Bobby in “Officer Krupke”); dancer/choreographer Miriam Nelson (her massive IMDB resume here); and George Chakiris who earned Oscar gold, one of only two actors in Hollywood history to do so for a dancing role (James Cagney, for “Yankee Doodle Dandy,” the other, in 1942), for playing ‘Bernardo’ in the movie.

Fascinating details about Jerome Robbins as co-director of the movie musical that garnered ten Academy Awards were revealed during the program. Read it here.