‘West Side Story’ feted, dissected, appreciated at the Academy 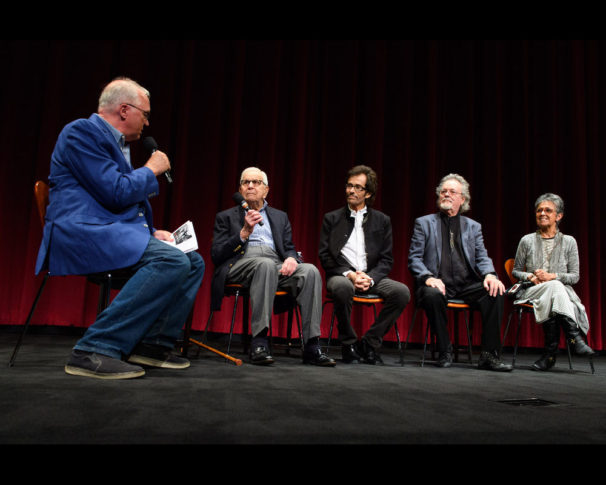 Producer Walter Mirisch and Actor George Chakiris prior to a screening of "West Side Story" presented by the Academy of Motion Picture Arts and Sciences, Monday, July 18, 2016.

Actors Robert Banas, George Chakiris and Maria Jimenez Henley prior to a screening of "West Side Story" presented by the Academy of Motion Picture Arts and Sciences, Monday, July 18, 2016.

Actors Robert Banas, Maria Jimenez Henley, George Chakiris and Russ Tamblyn prior to a screening of "West Side Story" presented by the Academy of Motion Picture Arts and Sciences, Monday, July 18, 2016.

PausePlayPlayPrev|Next
Fascinating film lore revealed by producer Walter Mirisch, at Monday’s panel discussion prior to a special screening of West Side Story (1961) at the Academy.

Apparently Jerome Robbins, WSS’s creator/co-director, was extremely resistant to the location shooting, in New York City, of the “Prologue” — the movie’s brilliant opening minutes when an overhead shot drills into a playground populated by two youth gangs, finger-snapping, singing, dancing, and brawling.

According to Mirisch (whose picture garnered 11 Oscar nominations, winning 10 of ’em), Robbins preferred that the sequence — his creation — be shot on a sound stage. It was the producer, along with co-director Robert Wise, who prevailed in staging the concrete-jungle milieu of the magisterial opening number of “West Side Story.”

Once Robbins was cajoled into the location shooting, however, he got on board with characteristic intensity.

[Mirisch shared: “I promised him that he could re-shoot [indoors] if the outdoor location-shooting didn’t work out. Of course I had no money to do so, but he didn’t know that.” To which panel moderator Randy Haberkamp good-heartedly quipped: “Spoken like a producer!”]

Several references, primarily by Mirisch, about the enduring relevance of West Side Story — a fable of tribal behavior and the inevitable violence in tribal conflict. Mirisch said that “West Side” (as insiders call it, dropping the “Story”) may even be more relevant now than at its release 55 years ago. He made a plea that new audiences see the movie and try to understand its meaning. Oscar-winning actor George Chakiris, as well, noted the racial prejudice that still festers in our world today.