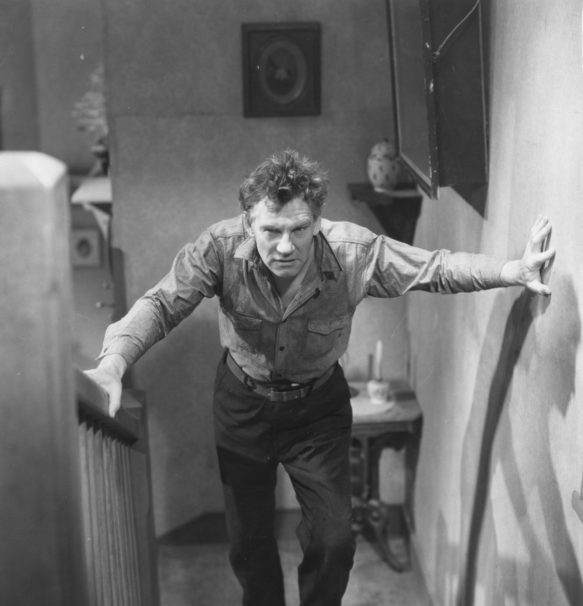 A House Divided
— it’s one of those handy generic titles that has lent itself to half a dozen movies and a whole lotta TV episodes over the years. Back in 1931, it was an especially apt name for an early talkie starring Walter Huston, neatly encapsulating the drama’s dark oedipal stew. It’s a work that’s anything but generic; as film noir aficionado Eddie Muller said when introducing the newly restored feature at the recent TCM festival, though it predates the noir period, “this movie is grimmer than the grimmest film noir.”

The William Wyler-directed picture also predates the enforcement of Hollywood’s Hays Code of censorship guidelines. Though there’s nothing sexually graphic about it — at least by today’s standards — the film casts an unflinching pre-Code gaze on the story of a widowed Pacific Coast fisherman (Huston) whose mail-order bride (Helen Chandler) falls for his son (Kent Douglass).

New Yorkers will soon have the chance to see this rarity, which is screening three times during a month-long MoMA program curated by Dave Kehr, focusing on obscurities and restorations from the vaults of Universal Pictures.

The film is such a rarity that David Wyler, the director’s son, had seen it for the first time only days before the TCM Classic Film Festival, where he appeared with Muller to present it to festgoers. David Wyler’s wife, he noted, couldn’t get the movie out of her mind. With its unsettling drama, compelling performances and assured craftsmanship, it’s likely to affect many viewers that way.

Wyler — who would become one of Hollywood’s leading filmmakers, helming such celebrated features as The Best Years of Our Lives, Ben-Hur, Roman Holiday and Funny Girl — is in full command of the medium for his second talkie. He had dozens of silent films under his belt, but unlike many directors transitioning to the sound era, he maintains a strong sense of cinematic movement in A House Divided, whether the camera is gliding across the fishing village or maneuvering through the titular household’s emotionally cramped quarters. The film is also notable for its sophisticated use of offscreen sound as well as rear projection, tank work and miniatures — the most whiz-bang special effects available at the time.

Wyler lays out the story’s conflicts with the kind of concision and visual power that many contemporary filmmakers could learn from, and the screenplay by John B. Clymer and Dale Van Every is all the more gripping for being pared down. Up-and-comer John Huston, who would go on to have his own stellar career on both sides of the camera, contributed dialogue. (Speaking of the decades-long friendship between his father and John Huston, David Wyler told Muller with a smile, “They had a very good time together.”)

Walter Huston, best known today as the grizzled old-timer in his son’s Treasure of the Sierra Madre, cuts a lusty figure in House, his imposing physicality a force of life and death in equal measure. It’s no wonder that his fresh-from-Montana bride confesses, with guileless candor, “I’m afraid.” The perfectly cast Douglass (who would soon change his professional name to Douglass Montgomery) is the father’s sensitive antithesis, but his hesitancy gives way to action as this hauntingly unwholesome triangle plays out.