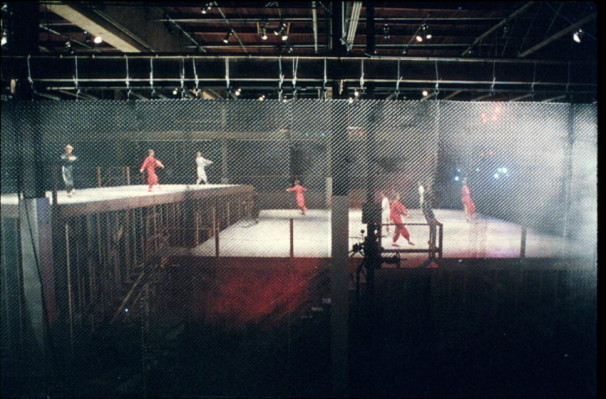 It was the silver-mesh curtain draped across Disney Hall’s “McFries” pipe organ that gave the performance its first “wow” moment. Almost as though architect/set designer Frank Gehry tossed a throw-rug over a messy sofa to ‘red up for the guests. But Gehry’s living room is none other than L.A.’s stellar fantastic transformational concert hall named for Walt Disney. In that splendid arena where arts magic regularly transpires, choreographer Lucinda Childs relished a dream come true: the restaging, 32 years after its premiere (at MOCA’s Temporary Contemporary warehouse space in 1983) of her gone-missing minimalist dance pageant set to an electronic score by composer John Adams, “Available Light.” 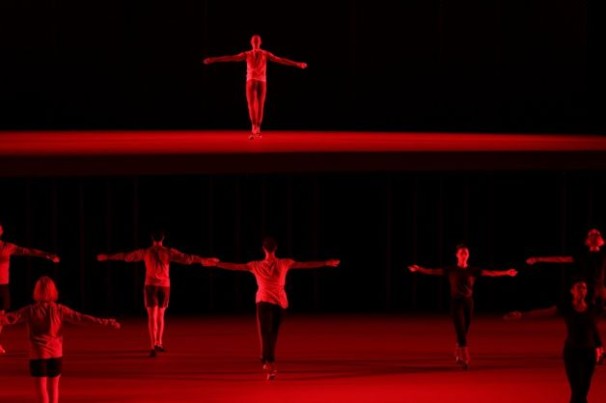 The rich mise-en-scene, charged with high-caliber performance, offered satisfying viewing for audiences last Friday and Saturday nights, of the historic reconstruction as part of the Los Angeles Philharmonic’s “Next on Grand” contemporary music series. 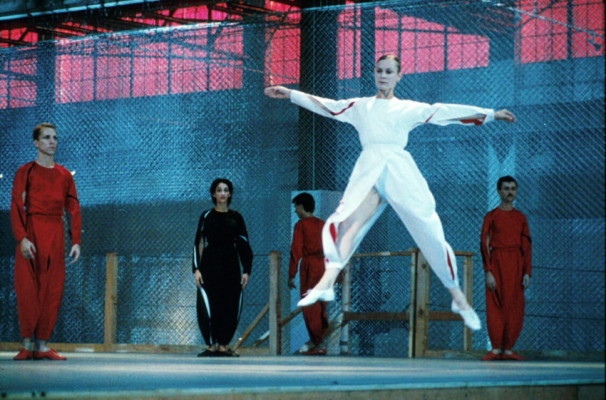 The hanging, mesh thing-a-mabob—a gorgeous sculptural element, the bringing indoors a fragment of the external, come on, a chain link fence!—topped up Gehry’s two-tiered installed stage. The lower of the platforms, nearer to the audience, stood on tall legs that echoed the metallic theme. And through that portal entered a dozen dancers. Color-coded in white, red and black costume, they were akin to animals filing into the slaughterhouse so openly and plaintively did they give themselves to Childs’ rigorous and nonstop, really punishing, ballet minimalism. The  full-hour showcase of dutiful, thorny, tongue-twisting, repetitive, balletic ‘enchainements,’ — strings of movement deployed this way and that, backward and forward, on high platform then on low — was all bathed in Beverly Emmons’ crazy-aggressive lighting scheme.

No, Beverly was not a good girl. Her light design was neither ‘subtle’ nor ‘invisible.’ Naughty person, she was visually vocal. It’s as though she sat at her dials, zealously amping them up and down, while the dancers, in cross-hatch configurations, pittered through their patterns. Beams of hot white, dullish red, then a dirty bordello red, a spooky beige. Then it was the high-noon Southern sun—creepy. The light made you feel a lot of different things. You felt lazy, like, “Let them do the work.” You felt anxious, like, “Shouldn’t it end soon?” You felt awed, like, “This is so beautiful.”

Yes, beautiful and a fun blast from the past. When I was around 25-years old and dancing in New York, this was the kind of work that I performed. Highly technical, patterned, heady dance minimalism. Disguised as easy-going, it was demanding, tough-minded, brainy. Little chaine turns, little chasse connectors, little pulsating rhythms, sparse, sparing, niggling even. An eensy lean into a forced-arch foot for respite. A directional swivel. A new start? At best meditative, at worse mindless, like hapless ping-pong balls, like little marching soldiers if only soldiers had pretty legs.

A brilliant time in Disney Hall: the restaging of Lucinda Childs’ “Available Light.”