Billie Holiday in Los Angeles: the blues were brewing 2 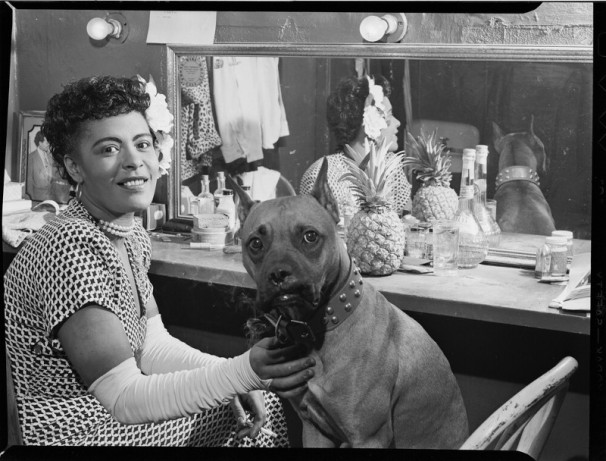 One of the greatest jazz singers who ever lived had a small voice, never more than 15 notes at her disposal, and recorded many throwaway tunes.

But Billie Holiday (1915-1959) was great by virtue of her sure-footed musical gifts: behind-the-beat phrasing, synchronicity with musicians, swing-based time, inherent blues feeling, and the ability to elevate musical trifles to jazz standards.

Her history with Los Angeles was complex: she enjoyed great personal freedom here and many musical triumphs—both onstage and in the studio. But Holiday sometimes found herself in the same desperate circumstances that plagued her in other parts of the country.

In honor of the centennial of Billie Holiday’s birth—April 7, 1915—we’re excerpting my liner note essay to the upcoming two-CD “Banned in New York” collection of rare, live recordings on the Uptown label. The first disc contains all of her Shrine Auditorium concert of December 1949. 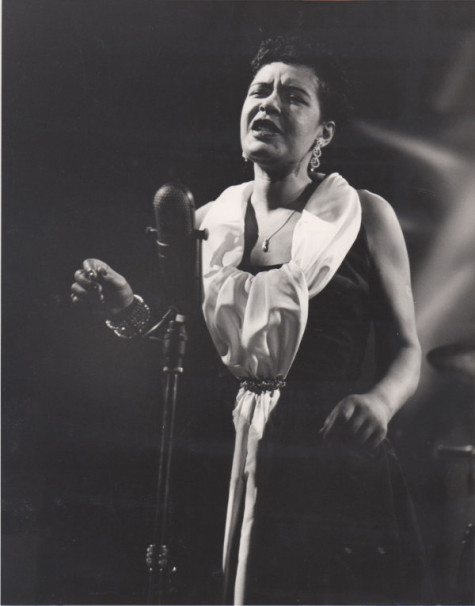 In May of 1948, Billie worked the Ebony Club at 1678 Broadway in New York City, managed by John Levy. He was half black, half Jewish, and all rat. (This was not the bassist John Levy who would have a very successful career in management.) Levy was a pimp and a hustler, but most important to Billie, a fixer. Their affair began during her four-week run, which somehow happened despite her lack of a cabaret card. Before long he was handling her business matters.

In July, Levy booked Holiday for a torturous six-week run at Broadway’s Strand Theatre: five shows a day, seven days a week. She headlined with the Basie band, comics Stump & Stumpy, dancers the Two Zephyrs, and Humphrey Bogart starring in Key Largo. She pulled down $3,500 a week, but later claimed she never saw a dime. Levy’s accounting was shrouded, but she liked the Cadillac, the mink coat and the house in Queens he provided her.

By December, Billie and her trio were in Los Angeles. Gene Norman, the KFWB deejay who was beginning his storied career as impresario, had booked her into the Long Beach Municipal Auditorium on December 13, and the Shrine Auditorium the next night, with the Red Norvo Sextet sharing the bill. Norman was the only L.A. radio host whose show she would guest on and he would book her well into the 1950s at his Crescendo club.

The Shrine material ranks with her best live recordings. Bobby Tucker, one of her most inspired pianists, lays out the harmonic palette of each song before the stanzas, and arpeggios at the end of her phrases. She’s in full control of her instrument and having fun with the songs. The girlish giddiness sometimes heard in the Brunswicks is gone; she’s womanly in her directness of expression and authority. On “Good Morning Heartache,” she makes the vowels plastic (“…stop hauuun-ting me now…” and “…just leeave me alone…”) and injects melisma into her Lester Young-like coda. She’s loose and swinging on “You’re Driving Me Crazy” and gives a dramatic reading of “I Wonder Where Our Love Has Gone,” Buddy Johnson’s undervalued gem. (It’s one of several tunes that were new to her repertoire up to that point; she continually searched out good songs.) A dead-slow “Strange Fruit”— sung with unflinching resolve and chilling clarity follows it.

The Holiday-Norvo package was booked into Billy Berg’s club at Vine and De Longpre in Hollywood for the last two weeks of December. If all of her musical cylinders fired at the Shrine, Billie’s life was in one of its most chaotic periods. Levy was proving to be possessive and vicious. Los Angeles was unseasonably hot that month (retired schoolteacher Terdema Ussery recalls people in shirt sleeves and shorts in front of Santa Monica’s Aragon Ballroom on Christmas Eve), and trouble was brewing. One night she slammed the top of the keyboard down, barely missing Tucker’s fingers.

Jimmy Rowles, there with the Norvo band, had played for Billie when he was pianist in the Lee and Lester Young Band at Berg’s zebra-decked Trouville Club in June of 1942. It was a rare extended club date where Billie and Lester worked together. Lana Turner, Bette Davis and Mel Torme were among the dancers and listeners who came to hear the band.

Billie made quite an impression on the 22-year old Rowles. He described her as “one of the most beautiful women I had ever seen. Her skin was like satin…flawless. And she was very graceful. …She’d put the record machine on and start dancing around, snapping her fingers. She was just adorable.”

Berg’s had a bit of a circus atmosphere on New Year’s Eve 1949. The flamboyant actress Tallulah Bankhead was there, and she had hated Levy since the Strand Theatre run. She’d had a wild threesome with Billie and comic Stump Cross, and Levy was jealous. She snubbed Levy at the club, calling him a bloodsucker, and the torpedoes were in the water. Near midnight, Norvo cued the band to be ready for “Auld Lang Syne.” Billie was in the kitchen, off the stage, with a number of people including thug Johnny Stompanato, and the one-legged Chinese cook. Levy stormed into the kitchen and in short order a brief melee ensued, with screaming and airborne crockery.

The details have always been murky but Rowles later recalled: “From behind the curtain comes this ofay cat I’ve never seen before, and he’s got a white shirt on, no tie, and…he’s got a twelve-inch butcher’s knife buried in his left shoulder just above his heart, and the blood is gushing out and his eyes are glazed and he’s coming at me; he’s in shock and he’s two feet from me and he’s gah-gah-gah, and I look at this cat and I say ‘Holy Christ!’”

Tucker claimed that Levy did the stabbing, but Billie surrendered to the police a couple of days later on a charge of assault with a deadly weapon. A month later Billie and Levy were arrested for opium possession in San Francisco. The case against him was dropped, but she was indicted by a grand jury. With the help of lawyer Jake Ehrlich, she beat the rap, though she appeared in court with a black eye. “You should see my back,” she advised Ralph J. Gleason of Down Beat, “and he even took my silver blue mink coat—18 grand worth of coat. He said he was going to give it to his sister to take care of. I turned my life over to John. He took all my money.” She was acquitted in June, but still had to pay $2,145 to a former manager for breach of contract and $1,500 to a woman whose leg was cut by a thrown dish. Billie and Levy reunited happily.

In June and July of 1950, she played an East Coast tour of one-nighters from Baltimore to Jacksonville, Florida, backed by Gerald Wilson’s Orchestra. At the end of it, Billie and the band were stranded with no money–Levy’s parting shot to her.

Not too long after that, Billie met Louis McKay in Detroit. He had a wife and children but when Billie left town he accompanied her. He would be the last man in her life. 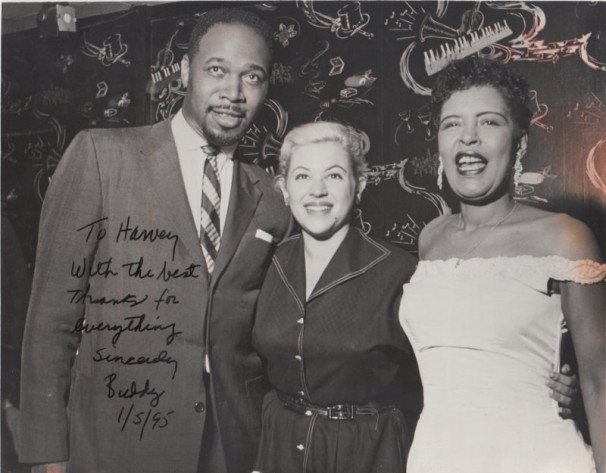 …In August 1956 she was in L.A. to work at Jazz City in Hollywood for two weeks. Opening night was the biggest the club (“a crap-box” according to bassist Putter Smith) ever saw. Jose Ferrer and Rosemary Clooney sat at ringside and had gardenias delivered nightly. She taped the “Stars of Jazz” TV show, this time with 20-year old pianist and harpist Corky Hale at the keyboard.

Hale had gone to Las Vegas with Jerry Gray’s band and at the first day’s rehearsal, Billie walked in upset that she didn’t have a pianist. One look at the blonde pixie at the keyboard hardened her manner. But after going through the tunes, Billie threw her arms around Hale and said, “Honey—you’s my little girl.” Corky played the engagement and afterward Billie insisted that she accompany her to Jazz City.

Contrary to “Stars of Jazz” host Bobby Troup’s dewy-eyed comments about Billie’s relationship with McKay, Hale remembers the dark mood of the dressing room. “I tried to stay away from him,” Corky recalls, still cringing. “He threw the phone at her and cut her head; he cheated on her, and he stole her money. I was scared to death of him.”

Hale’s duties included helping Billie onto and off the stand, and things didn’t always go smoothly onstage. “I was in charge of everything,” Hale told Donald Clarke. “I was very uncomfortable. She wouldn’t come in (in the right place), we had to go back a couple of bars, panic every night as to whether she was going to get through the numbers.”

McKay had the reputation of being Billie’s drug connection but Hale disputes that fiercely. “I never saw any drugs,” she insists. “If I had I would have left immediately. She drank all the time, though. I was with her during the day and I fixed her drinks. She liked gin, and she drank it all day long. I’m sorry to say this but her brain was so fried, that it was heartbreaking to watch. She had this little Chihuahua and she used to feed it with a bottle and diaper it. She really wanted children and it was pathetic to watch her put all those maternal feelings into a dog.”

2 thoughts on “Billie Holiday in Los Angeles: the blues were brewing”