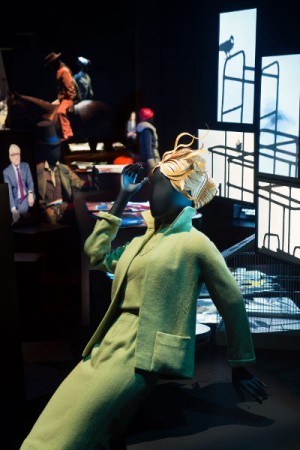 One of the marvelous interactive exhibits at the just-opened “Hollywood Costume” exhibition, a co-presentation by The Academy of Motion Picture Arts & Sciences and the Victoria & Albert Museum at LACMA’s May Company building, is a virtual conversation between three movie collaborators. Two, alas, are deceased, but one is still vibrantly alive.

While this fun conversation about Hitchcock’s “The Birds” ensues, fabric swatches, costume sketches, a cool barrage of digital collateral is projected onto a table top-turned-monitor screen. And there you stand, as a spectator. listening in and looking on at this clatch of audio-video reportage. Other exhibits in this section of the rich and rewarding multi-roomed show (it’s grown to 150 costumes since it got its start at The V&A), include similar conversation circles between Martin Scorsese and  designer Sandy Powell apropos dressing Daniel Day-Lewis in “The Gangs of New York” and Quentin Tarantino nattering with Sheren Davis (costume designer of “Django”).

In her interview, Hedren notes that her “Birds” character passes a great deal of the movie dressed in one single costume only: a parrot-green two-piece suit. Naturally,  Hedren, a former model, is riveting in this ensemble. Its color selection, remembers the actress, put Ms. Head into deep contemplation “so people would not be sick of looking at me in it.” Hedren, who remembers Head as “charming and funny,” acknowleded the iconic designer’s great ability in “transforming people.” 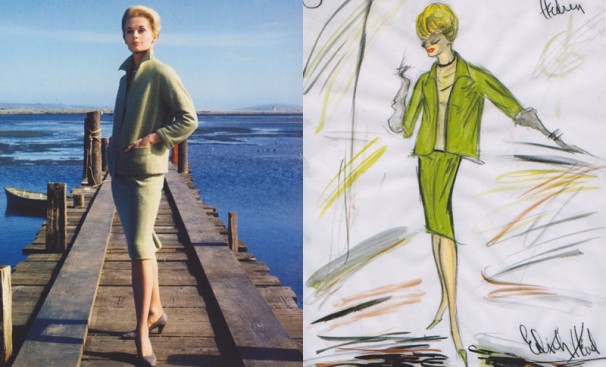