Arts ladies of the weekend 2 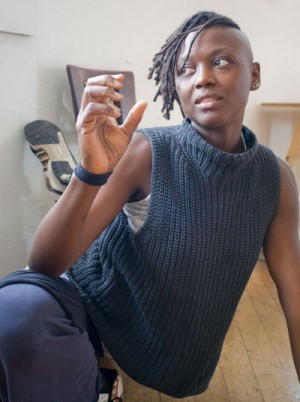 It gave pleasure, in disparate performances over the weekend, to find and then ruminate on two outstanding players — both exemplary contributors operating in a mixed terrain.

Ms. Paggett appears to be the muse of the savvy and talented choreographer David Roussève, and that would be a cool thing to be. She led the way, in her stage presence and solid good dancing, ratcheting up Roussève’s full-evening work, “Stardust,” before a very packed and receptive audience Saturday night at the Carpenter Center for Performing Arts in Long Beach. 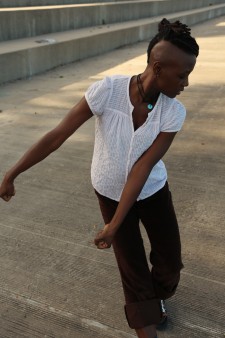 A highly idiosyncratic dance-drama, really the output of a choreographer-auteur, “Stardust” explores, with remarkable integration of action and idea, visions of love — both carnal and romantic — family, sexuality, intimacy, loneliness, and lust. It’s acted out through an imagined character the audience never sees, but experiences via his text-message jottings projected on the stage backdrop. That’s a clever premise in an age in which most of us pass our days relating to invisible-others by typing. The work tours a generational gap, through its tasty music selection — it’s steeped at one end of the spectrum in the deep sentimentality of Nat King Cole singing the (titular) Hoagy Carmicheal song. Roussève creates contrasts, using hardcore hiphop music, to the troublingly harsh, even nasty, reality of contemporary coupling.

The dance concerns the quest for tenderness; violence and abuse figure in.

Bringing just-so musicality and poignant pain to the Carpenter’s wide-vista stage was Paggett, dancing as a soloist, at one point to singing by Ella Fitzgerald. She popped out from an uneven student-y cast — Roussève deserves top dancers and he has worked with them: Cleo Parker Robinson’s group, Ballet Hispanico, the Atlanta and Houston Ballets. An exception was the super-relaxed, funky and unified rendering of Roussève’s hugely romantic group choreography to “Sweet Lorraine,” what a gorgeous, spacey song, just perfect for dancing … really the pinnacle of the evening. Through it, I so enjoyed Paggett’s intelligent, finely etched dancing.

At a Sunday matinee staging of Oscar Wilde’s Victorian parlor drama, “The Importance of Being Earnest,” at Pasadena’s classical theater company, A Noise Within (now in its third season at its multi-million dollar facility, I had my first visit), one particularly skilled player stood out.

A mild jolt, initially, to see Carolyn Ratteray, a woman of color, playing Gwendolen Fairfax, the huffy, haughty and righteous love object of John Worthing, known in Wilde’s much-traveled farce, if only temporarily, as Earnest.

As an ensemble piece, the “Noise” production took forever to reach lift-off — it sagged and bumped along a dramatic bottom in the (short) first act, stricken by actor Adam Haas Hunter’s lack of clarity in his stage-setting appearance as Algernon. His enunciation challenged (this improved in act II); his constant motion distracting. Neither of Hunter’s garish costumes worked for me, overpowering, as they did, his performance. Only well into the long second act did tongues loosen and actors align behind Wilde’s familiar zingers so they could reach their mark — as audience brain ticklers. A difficult task in the weirdly configured basement thrust-stage theater of A Noise Within, where gobs of air space loom above actors’ heads as well as in their ‘forward space’  — a big air cavern into which protrudes an oddly designed balcony; it’s all jagged edges. I found it an artless arena, uncozy, neither cool and industrial nor enjoying any decorative niceties (the project shows little evidence of the building’s mid-century-modern roots); it is a sterile promontory. The theater is detached from its lobby by a floor, connected, only, by a single narrow staircase up and down which the entire audience tediously tromps at intermission. Rest rooms are miles away. The afternoon ended in a janglingly noisy parking lot located in the lap of a California freeway… a confusing experience.

As Gwendolen, Ratteray’s upper-crust natterings delighted with their impeccable, sing-song quality; her clarion delivery reenforced by an imposing physical presence. Amusing variations on wide-eyed expressions rolled from her plastic visage; at rest, she wore an gaze so open as to deflect all on-comers. Ratteray’s two big scenes, one with Christopher Salazar, capable and clear as John Worthing, her affianced, the other with Marisa Duchowny as debutante Cecily Cardew, provided the production’s high comic moments, as actors sparred confidently, tossing, as if toys, Wilde’s witty morsels. The show is overall a mixed bag; however, there’s always a pay-off from hanging around with Oscar for a few hours.

The Importance of Being Earnest | A Noise Within | thru Nov 22 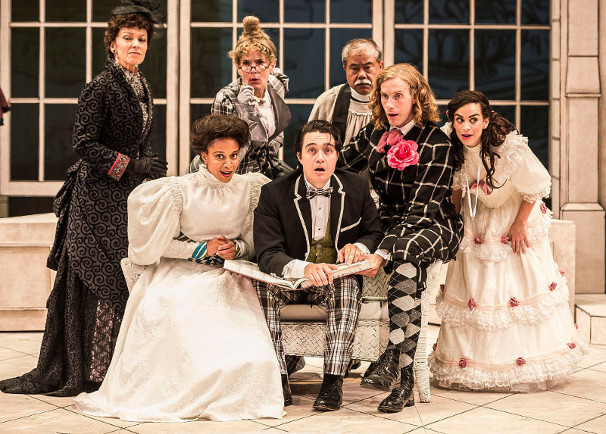 2 thoughts on “Arts ladies of the weekend”