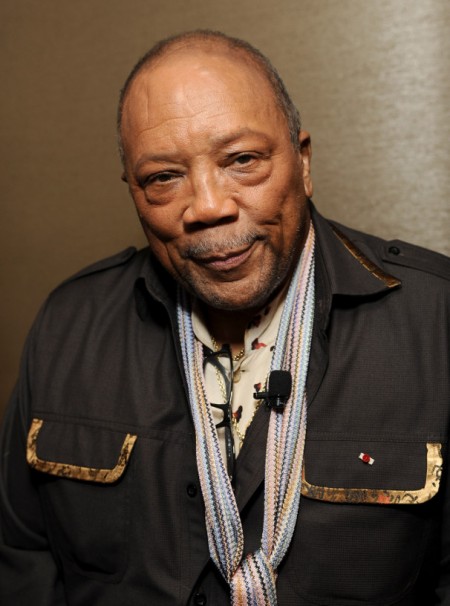 At arts·meme, we like it when art begets art. That’s why we respond so positively to photographer Stefanie Keenan’s outstanding photo-portrait of an artist — Quincy Jones — that came across the transom from Turner Classic Movies this morning.

The prodigious Jones gave a fascinating, free-wheeling interview to movie (and jazz) maven Leonard Maltin at yesterday’s “A Conversation With Quincy Jones” at the Roosevelt Hotel. 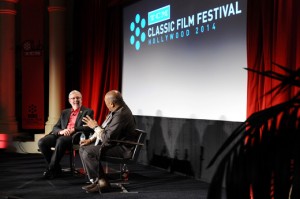 Maltin introduced the legendary Music Man as follows: “I get to interview a lot of people today. A trumpeter, a composer, a producer, a record executive, a humanitarian, a legend, and a brain surgery survivor.”

Jones, in response, free-associated his way through a thicket of memories from his hugely accomplished music career spanning a record 79 Grammy nominations, 27 Grammy awards and a Grammy Legend Award in 1991. There was lots of Sinatra, and dollops of Sidney Lumet, Richard Brooks, Steven Spielberg, Hal Ashby in the mix.

Jones knows how to mix it up, not just in the recording studio but also verbally.

Concerning his youth on the south side of Chicago, “We were gangsters, man. That’s what Chicago is like. Something in the water raises gangsters.” 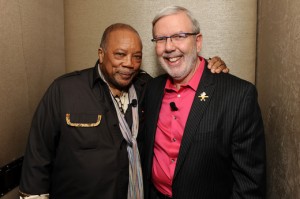 This upbringing prepared Jones for professional career. “I’ve been around mafia all my life. All the night clubs were run by them. In Vegas, one of the club owners told me, “F.S. [Sinatra] to me you are okay. You’re part of the famiglia. But there’s two things you don’t break: your word … and my effing balls.”

Jones recalled the racism: “I didn’t realize Vegas was so racist in 1964. Sammy, Basie, Lena, Belafonte and I had to eat in the kitchen. We couldn’t go into the casino.”

On Sinatra: “He was amazing to work with,” but, added Jones, “He was bipolar. He would run you over like a Mac truck in reverse. Miles was like that too .. all bark and no bite.”

Jones thrust his fist toward the audience, showing a pinkie ring. “I have this ring from him [Sinatra], I’ll never take it off.”

Jones’s distinguished film-scoring vitae ranges from “The Pawnbroker” (1964), “In the Heat of the Night” (1967), “The Italian Job” (1969), and “The Color Purple” (1985), several movies included in the roster of the film festival now rolling on Hollywood Boulevard. Recalling his first big film scoring gig, Jones said, “After I finished ‘The Pawnbroker,’ I was so happy I couldn’t see straight.”

Maltin pointed out the film’s groundbreaking quick cuts achieved by editor Ralph Rosenblum, calling “Pawnbroker,” “a tough unflinching powerful movie that reveals itself gradually,” then asking Jones: “how do you translate that to music?”

With purely visual imagery, Jones said, “you don’t care unless you have music. It’s a constant cycling of tension and resolution, using dissonance and consonance. When it’s consonant, it’s resolved.”

A tough stint working at Universal led to five movies with Sidney Lumet, Richard Brooks (referencing his “In Cold Blood,” Jones said, ‘That baby grabs you by the throat.’)

Jones drifted out of film work because “before Dolby sound, I hated the sound. The sound was not working for me.”

He described Dolby’s great achievement of getting proper speakers into theaters.

An important film relationship for Jones was with editor/director Hal Ashby. “He had amazing influence. I was attracted by his obsessive, 27-hour stints editing “In the Heat of the Night.” Hal used to call me at five in the morning saying ‘You have to see this thing.” It was the Steadicam, Hal was the first to use it in “Bound for Glory.” I have his directing chair and his glasses.”

Jones is a veteran of a couple of tough productions: “If you do the Oscars and the Inauguration, you’re not scared of anything.”