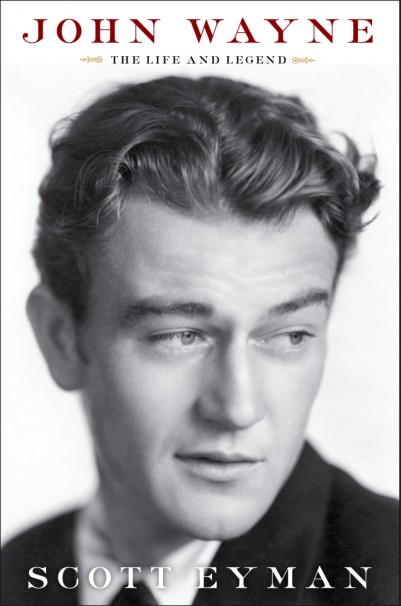 Just because TCM Classic Film Festival will be ramping down on Hollywood Boulevard next Monday does not mean that fantastic film events will disappear! Indeed, April 14 offers a stellar and intimate conversation with one of the nation’s leading scholars and writers of Hollywood history, discussing his latest oeuvre, his biography of John Wayne.

That is author Scott Eyman discussing “John Wayne – The Life and Legend.”

Eyman’s publisher, Simon & Schuster, notes that while John Wayne was one of Hollywood’s most famous and most successful actors, he was more than that. He became a symbol of America itself. He epitomized the Western film, which for many people epitomized America. He identified with conservative political causes from the early 1930s to his death in 1979, making him a hero to one generation of Americans and a villain to another. But unlike fellow actor Ronald Reagan, Wayne had no interest in politics as a career. Like many stars, he altered his life story, claiming to have become an actor almost by accident when in fact he had studied drama and aspired to act for most of his youth. He married three times, each time to Latina women, and conducted a lengthy affair with Marlene Dietrich, as unlikely a romantic partner as one could imagine for the Duke. Wayne projected dignity, integrity, and strength in all his films, even when his characters were flawed, and whatever character he played was always prepared to confront injustice in his own way. More than thirty years after his death, he remains the standard by which male stars are judged and an actor whose morally unambiguous films continue to attract sizeable audiences.

Eyman’s biography draws on personal interviews with Wayne, as well as production company documents that shed light on Wayne’s business affairs. He traces Wayne from his childhood to his stardom in Stagecoach analyzing Wayne’s relationship with John Ford with whom he collaborated on his most known films She Wore a Yellow Ribbon, The Quiet Man, and The Searchers. His evaluation of Wayne himself is shrewd: a skilled actor who was reluctant to step outside his comfort zone. Wayne was self-aware; he once said, “I’ve played the kind of man I’d like to have been.”

Scott Eyman has written eleven books, including biographies of Hollywood legends such as John Ford, Ernst Lubitsch, Cecil B. DeMille, and Louis B. Mayer. He also collaborated with Robert Wagner on two books. He has written for The New York Times, The Washington Post, and The Wall Street Journal, and he is the literary critic for The Palm Beach Post. He lives with his wife, Lynn, in West Palm Beach.