Four actors and “The Heiress” 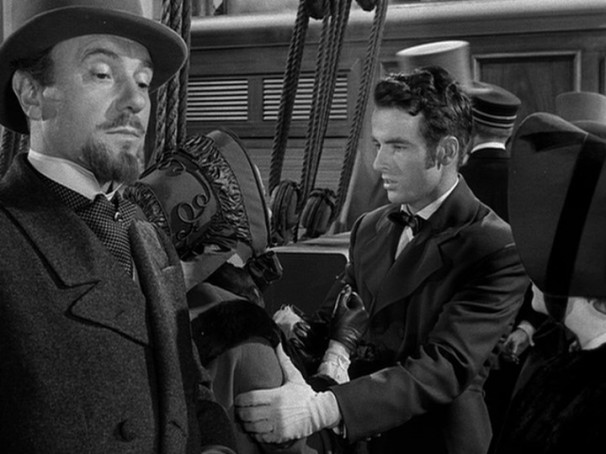 Because so much of the programming for TCM Classic Film Festival 2014 focuses on Classical Hollywood, any given day of viewing during the four-day event (suitably enough, located on Hollywood Blvd., with the Chinese Theatre complex as epicenter) is an immersion in acting. Champions of auteurism argue that the story of Hollywood studio movies from the mid-teens to the mid-sixties is a story of directors. This argument is wrong on so many counts that we don’t have room here to fully explain why; let’s just start with the fact that Classical Hollywood is the result of mainly the work of studio moguls, their producers and the actors and writers those producers hired. Directors come a distant fourth in this cosmos.

On the big screen, though, especially at this festival, actors rule. Just on Thursday night alone, you could see a besieged Joan Crawford opposite an astounding, no-holds-barred Bette Davis in “Whatever Happened to Baby Jane?” and then a fiery, commanding Joan Crawford in the earliest revisionist Western, “Johnny Guitar.” I love, love, love “Johnny Guitar”—it’s one of the great American cultural landmarks of the 1950s—but I opted instead to see “The Heiress,” written by Ruth and Augustus Goetz from their play based on Henry James’ “Washington Square,” with the great actor’s director William Wyler helming Olivia de Havilland, Ralph Richardson, Montgomery Clift and Miriam Hopkins. I’d never seen it, a major hole in my cinephilia.

Whoa. Watch “The Heiress” (here in an excellent 35mm print) and it becomes clear that there are few American movies of its time or later that match or surpass it for sheer acting brilliance, precision and emotional impact, a perfectly realized domestic chamber piece that shouldn’t have worked at all. 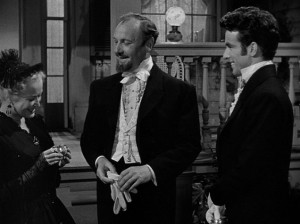 The four actors at the center of “The Heiress” come from completely different, even opposing, schools of acting. De Havilland, stage-trained and studio-bred, the pro’s pro, malleable, gifted with a delicately tuned acting instrument of subtle nuances and slow-burning emotions. Clift, the hot hero of the burgeoning Method School, raw and ultra-modern, the closest thing in Hollywood in 1949 to the avant garde. Richardson, an even more refined example of British classical theater than Olivier, the absolute master of contained emotions and the kind of exact line deliveries that could stop traffic. Hopkins, a loopy actor of rangy tones and colors, unpredictable, pure showbiz. A ridiculous mad scientist’s brew of actors, sure to blow up and make a mess. 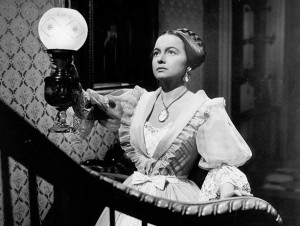 And yet, somehow, it works. Gloriously. Look at De Havilland’s plain-Jane Catherine, at first cowed by Richardson as her heartless, domineering father Dr. Sloper, who correctly but coldly suspects Clift’s handsome gentleman caller Morris Townsend of being more interested in Catherine’s large inheritance than Catherine herself. The only indication of time passing in New York’s timeless, tony Washington Square quarter (where the entire drama takes place, mostly inside the lavish Sloper household) is in De Havilland’s face, growing fuller and brighter and yet tougher as she learns more about the world and the ruthless men around her, a blossoming that’s also a hardening. It is something miraculous. 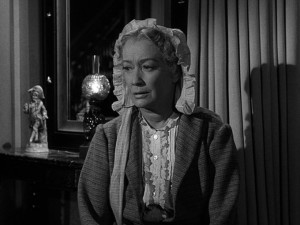 Hopkins as Catherine’s dithering, chatty aunt inserts a lighter voice, but it never distracts from the fascinating, intense triangle of actors—all keeping in character on and off camera except the bewildered de Havilland, whom the crafty Wyler used to maximum effect. He knew he had lightning in a bottle, but because he had a sound basis with a script written by the playwrights and one actor (Richardson) brilliantly re-creating the role he originated for the London production, he could let his actors go. They all fly — to astonishing heights.