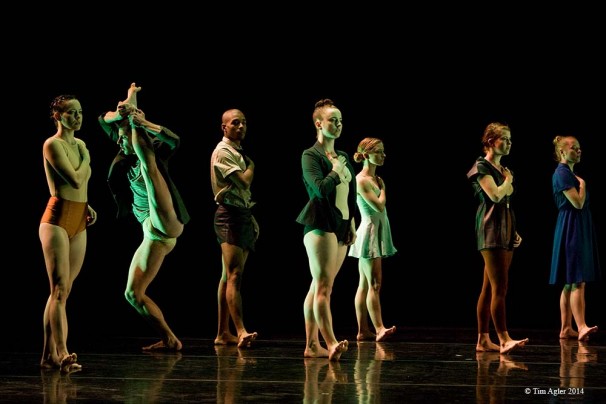 PausePlayPlayPrev|Next
Think of a Robert Crumb cartoon strip — in all its gnarly, grotesque glory. That roughly equates to watching the weird and wonderful foot-parade choreographer Danielle Agami sent across the Alex Theatre stage last night at the ninth annual “Celebrate Dance.” Agami’s “EXHIBITa,” chock-filled with witty movement invention in its Los Angeles premiere, offered the undisputed high point of the showcase event, which is the passion project of producer Jamie Nichols.

Burbling along to a very cool techno-pop soundtrack by Radiohead was Agami’s similarly crackling Ate9dANCEcOMPANY. Rumbling through “Exhibit” on a beat-by-beat basis — sections recall the obsessive spew-choreography of fellow Israeli dance-creator Barak Marshall — were Agami’s very appealing performers. A killer technician, Scott McCabe, led off the dance, clad in white underpants and tee-shirt, his legs bared. Add a suit jacket swinging open as though Sinatra at the country club, and you’ve got a startling sight. This dislocated look soon became the norm, as the eight-member company donned a droll array of costumes – a man in a short black kilt, a woman, the wonderful Rebecca Goldstone, in a brown thong, another lady in a leather dress, a kind of vest. Loads of body-on-view, beefy legs and butts primarily, but the fleshy look fit the work and kept it super real. No one looked bad. Everyone looked handsome.

Queer, unexpected locomotion streamed forth. Legs swung from the hip in a solemn stage march — a classroom “grand battement” cut loose from the ballet barre. A sideways bounce on derriere, indeed, tons of floorwork, a long neglected dimension of dance returned with a vengeance in choreography today. A creature traversed the stage in a full backbend, as at a circus freakshow. Men pogo-ed … yes just springing up and down; everyone in dance knows that men jump better than women. The choreographer works well in solo mode, for big groups and amazingly well for couples, there are sets of them in “Exhibit”; dopplegangers, really, populate this dance. At one point, two sets of twins, paired by their parallel movements, cross the stage. Love the rich, focused juxtaposition. Love the movement gags — humor in an art form that takes itself ridiculously seriously. I like the Agami-Girls, as they whip their shapely exposed thighs at warp speed. It’s a powerful brand of femininity (think Israeli) I find appealing, but it’s not strident, there’s no tension, instead the frenzy is highly contained. The high priestess of this bunch, Goldstone, a beautiful serene dancer whose hair knits closely to her head in neat braids, emits a restrained demeanor in marvelous contrast to her mad movements. Not to be too persnickety but kudos for the tidy hairdos across the board, thank you.

The “Celebrate Dance” showcase, every year providing a platform for aspiring dance troupes, affirms the basic truism about Los Angeles: a plethora of dancers and companies, a dearth of distinguished choreographers who bring both chops and exceptional artistic vision. While Agami, like the Frenchman-whose-name-needs-no-mention, is a recent transplant to Los Angeles, newly relocating here after several years in Seattle, it is absolutely tremendous that she is making such hip, with-it work in L.A. here and now. And a hierarchy is forming, with excellence at the top … welcomed. I appreciate, especially, Agami’s womanly touch. I’d couple her with filmmaker Sofia Coppola as a still-young but fully formed female artist whose strong vision comes nicely padded – like a velvet glove.