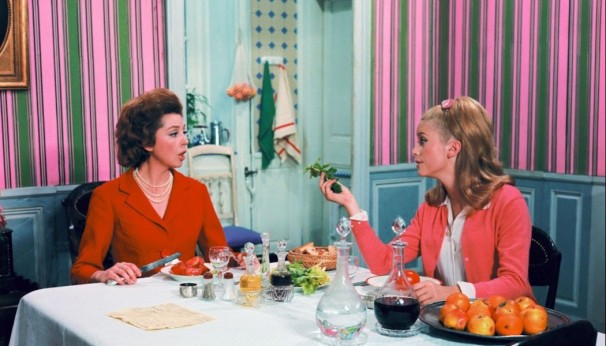 The delicious, the divine, the delectable and digitally restored, THE UMBRELLAS OF CHERBOURG, opens Friday at Landmark’s Nuart Theatre in Los Angeles for a one-week big-screen viewing engagement. 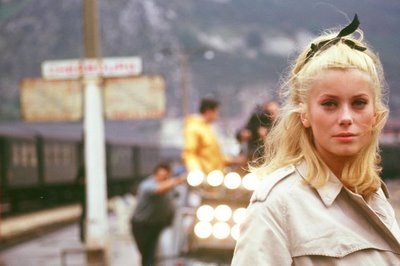 If you’ve not yet seen Jacques Demy’s candy-colored all-song French classic — yes, it’s an operetta à la française —  on the big screen doing so  at the Nuart, a classic cinema outlet, provides a splendid opportunity to do so.

On opening night, March 14, actor George Chakiris will offer remarks and commentary in a brief conversation with arts·meme‘s Debra Levine prior to the movie, which is marking its fiftieth anniversary. Chakiris will draw from personal memories of having worked on the film’s sequel, “Les Demoiselles de Rochefort” (1967), also a masterpiece, which re-engaged “Cherbourg”‘s creative team: Jacques Demy, Catherine Deneuve, and composer Michel Legrand. 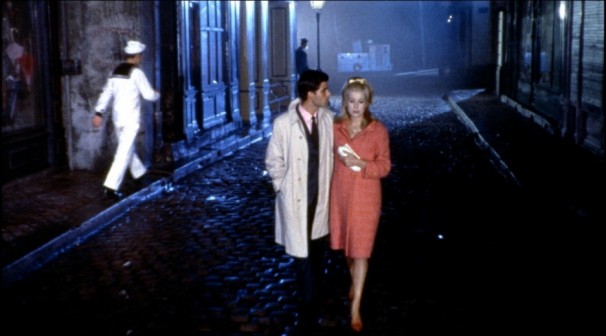 Demy’s “Umbrella” classic, made first in 1964, won the coveted Palme d’Or at the Cannes Festival. Beautiful umbrella-store clerk Genevieve (Catherine Deneuve) and charming car mechanic Guy (Nino Castelnuovo) fall in love in  rainy Cherbourg. Their romance is cut short when Guy is drafted to fight in the Algerian war. Life goes on. 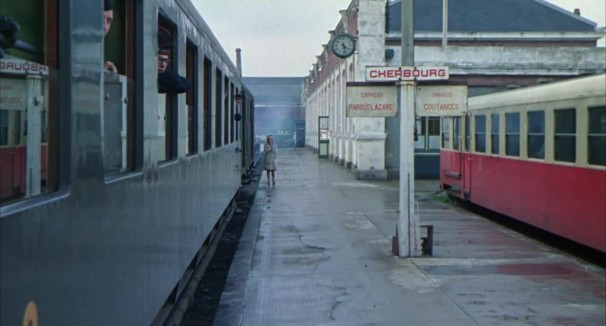 The film simply swirls its magnificent Michel Legrand score, as one familiar anthem unfolds after another; indeed every word of script is sung. It’s a woman’s movie, in large part, with long, emotionally complex libretto exchanges between Deneuve and Anne Vernon, playing her mother. Certainly one of the great films of all time, “Cherbourg” transcends the “movie musical” genre and remains exceptional and fresh in its straight-ahead performances and outstanding production design. It cannot but be wonderful viewing on big screen.

Making Friday’s event even more charming and meaningful is having recently chatted with Michel Legrand at Segerstrom Center for the Arts. The maestro was present and fully vivacious at a performance of the Hamburg Ballet’s “Liliom,” for which he  provided an original score.