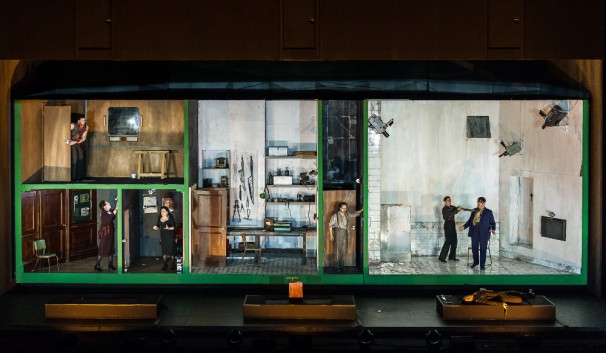 I’d been away from London, in New York, for Rodelinda’s Coliseum premiere but heard such good things about it that I arranged for one of its last performances and am so glad I did. Beyond the grace of Handel’s music conducted by baroque specialist Christopher Curnyn and played with usual panache by a reduced English National Opera (ENO) band, there was the wonder of Rodelinda herself, a female character to reckon with, wife, mother and queen, all of them noble, smart, and exquisitely personified by Welsh soprano Rebecca Evans. 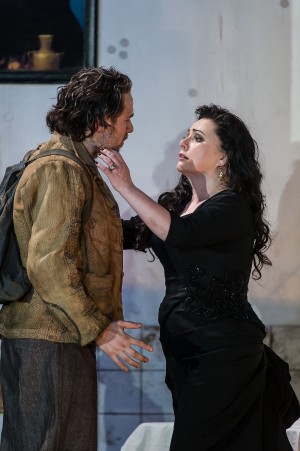 Loosely based on Longobard intrigues in seventh century northern Italy, filtered through a play by Corneille and two operatic texts, Rodelinda charts a woman’s heroic and canny resistance to marriage Grimoaldo, usurper of her husband Bertarido’s throne and his putative murderer as well.

Supporting characters are Eduige, Bertarido’s scheming sister and scorned fiancée of Grimoaldo; Unulfo, advisor to Grimoaldo who secretly supports the assuredly undead but existentially confused Bertirido; Flavio, the silent, adolescent son of Rodelinda and Bertirido; and Garibaldo, Grimoaldo’s henchman and the baritone baddie of the piece. There is no chorus. Nearly 180 minutes of music, not one of them dull and for once death only suffered by the deserving (Garibaldo).

Director Richard Jones has updated the opera from 7th-cum-18th century Lombardy to the Fascisto 1940s; but with the sets’ oblong boxes and more modern surveillance conceits, the strongly stylized emotions, tattoos and extreme weaponry, the proceedings had a graphic novel quality to my eye, Bertolucci’s The Conformist crossed with V for Vengeance, with the black-wigged singers styled in the manner of Dolce and Gabbana. There was a complexity to it all that might have overwhelmed were it not for soul-stirring musical excellence. 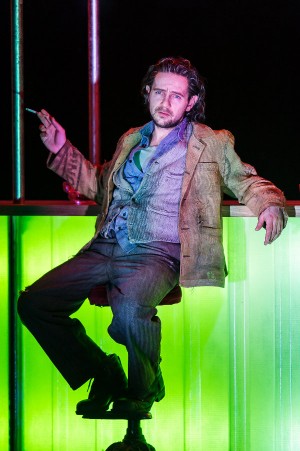 I’d heard counter-tenor Iestyn Davies in concert at some point, but was unprepared for the clear, heart-rending beauty of his Bertarido. Having misinterpreted his wife’s behavior (don’t they always?), his saloon lamentation of despair conjured a direct baroque paraphrase to Sinatra’s In the Wee Small Hours, sexily casual slouch and all. John Mark Ainsley’s luscious tenor caressed Grimoaldo’s paradoxical lust for power and hesitation in the face of the pure evil necessary to obtain all that he craves, into a position of sympathy. The one duet of the opera, in which Davies and Evans sang of their abiding, through thick-and-thin love of one another as their frames were pulled slowly to opposite wings of the stage, stopped the collective breath and wet the eyes of the entire house. The acrobatic Christopher Ainslie’s counter-tenor as Unulfo hadn’t the radiant lustre of Davies’ but it worked as the helpmate to the often self-righteously tunnel-visioned Bertarido, and his cartwheel off a moving treadmill was an easy 5.3. There were grit and understated humor to the diabolical connivings of Susan Bickley’s Eduige and Richard Burkhard’s Garibaldo; and Daniel Casey conveyed son Flavio’s journey from increasingly sullen to possibly psychotically dangerous with aplomb.

There was a time when I reserved my ENO visits for productions for which English was the original language, but in the past several seasons I’ve become an unabashed fan. Some translations work better than others; some of the innovations are, in my opinion, a miss; but it’s always interesting and the music-making always fine. Opera-loving visitors to London are well advised to set their satnav to the Coliseum. With bells on.