I was needing to hear some music but the last days before trans-Atlantic travel were beyond hectic. Nothing was fitting. Couldn’t get over to the Coliseum for an opera opening; despite all desire couldn’t fit in that last Vengerov, but the soul was saying “You gots to do something..” Egberto Gismonti at the Barbican. How about that?

I had a Gismonti cd from God knows when ago. 25 years ago? Hadn’t played it in a while but always liked it.  “That’ll do,” I thought. “Some mellow Brazilian guitar before travel could be just the ticket.” I invited my dear friend, baroque bass virtuoso Chi-chi Nwanoku to join. Neither of us was prepared. 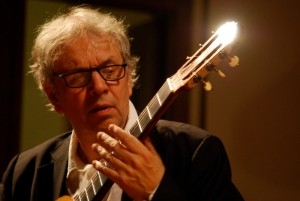 First up, the 72 year-old American-born Ralph Towner, awash in golden light but unassuming as he switched between his six and twelve-string guitars. Eyes directed on his left hand as its fingers nimbled and caressed about his own compositions and completely individual interpretations of classics, My Foolish Heart, Stomping at the Savoy, Good-Bye to the Pork Pie Hat, identified without elaboration in groups, a benevolent sage imparting grace and wisdom in temple into which all were welcome.

After the interval, a piano a 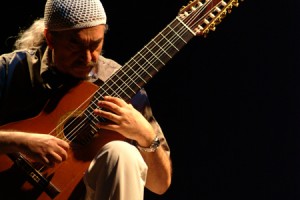 nd a guitar alone in slashes of colored light, blue and rose this time. Dressed in black, his mid-back length gray hair tied back with a bright red scarf-cum-skullcap, Gismonti walked on with neither fanfare nor greeting other than a Namaste bow — the first of three, which took the place of any words at all, took up his 10-string guitar and proceeded to annihilate our complacencies with unmitigated torrents of music:  indigenous and African Brazil- influenced riffs miscegnating with Europe’s Les Six, the guitar picked, strummed and percussed to produce one glory after another.  After five selections on guitar, another bow between moving to the piano, fluttering his fingers briefly before engaging the keyboard with the same utter mastery previously displayed on the guitar.

I won’t pretend that I understood more than a soupcon of what was happening musically, but in asking Chi-chi for an explanation of her wonder I got this reply, “Complicated polyrhythms and cross rhythms… a simultaneous juxtaposition of pulses. With Gismonti it wasn’t just a simple eighth note against a triplet. He lured us with different dances going on in either hand, and at increasing speeds. His intensely contrasted rhythms in each hand, with such virtuosity, would have floored many classical musicians.”

So there you have it. Two players of consummate artistry, with the acoustic guitar and years of experience in common, of disparate temperament and approach but complementary in their adventurous curiosity and unceasing flow of ideas. The respectable if not overflowing audience left the hall with complete satisfaction.