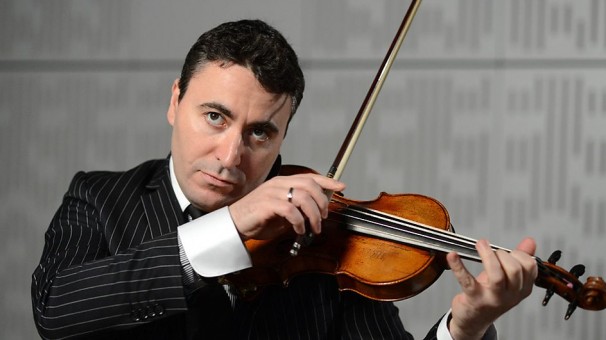 The cultural year begins slowly and gently in London. Matthew Bourne’s bare-chested swans in feathered breeches will be unsettling royal emotions at Sadlers Wells until the end of the month. The glossier pantos continued frolicking into the twelfth night and their venues still regrouping for heavier fare. So for me last week was classical music in recital, first the Florin string trio offering spirited Schnittke and Beethoven at an elegant Mayfair salon, then two days later violinist and now conductor Maxim Vengerov in recital with pianist Itamar Golan, the first concert of four in Vengerov’s Artist Spotlight at the Barbican. 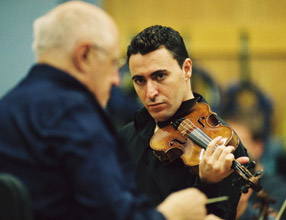 I first experienced Vengerov’s preternatural talent some 18 years ago when he was barely out of his teens and still traveling with his mother, at which time he grabbed the Brahms concerto by its gut and hurled it into the stratosphere. Took me with it. A brilliant , mind-boggling performance, but that of a very young man reveling, near rakishly, in what he could do. Now nearing 40, having taken a three year sabbatical to concentrate on conducting and teaching, a longtime UNICEF Goodwill Ambassador intending to launch his own record label, the wunderkind has deepened. The virtuosity is still there in spades. In the concert’s first portion sonatas by Elgar and Prokofiev featured dream-like passages during which the hair and steel of bow and string transmogrified into glass, water and shifting light, his fingers fluttering over the instrument like so many reeds in a breeze, with contrasting elements of probing, grit and despair, pianist Itamar Golan adding exhilarating ballast at every turn. Profound and life-enhancing stuff. 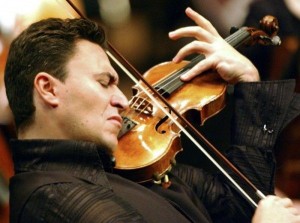 I’d wanted that complex intensity to continue so I was a bit wary of a second half that promised a collection of Romantic violin encores but beyond the let-it-rip, grandstanding technique required, it was Vengerov’s charm and generosity that had me saying midway “He can go anywhere he wants. I will follow and be glad.” Each selection was introduced by the artist with inclusive ease then performed with an infectious delight. At the close, Vengerov quieted the rapturous standing crowd to thank the Barbican, with open smile and hand on heart, for the opportunity they were giving him in these concerts to show so many sides of what he can do. I will be back.

Thank you, BBC-3, for use of your photo.