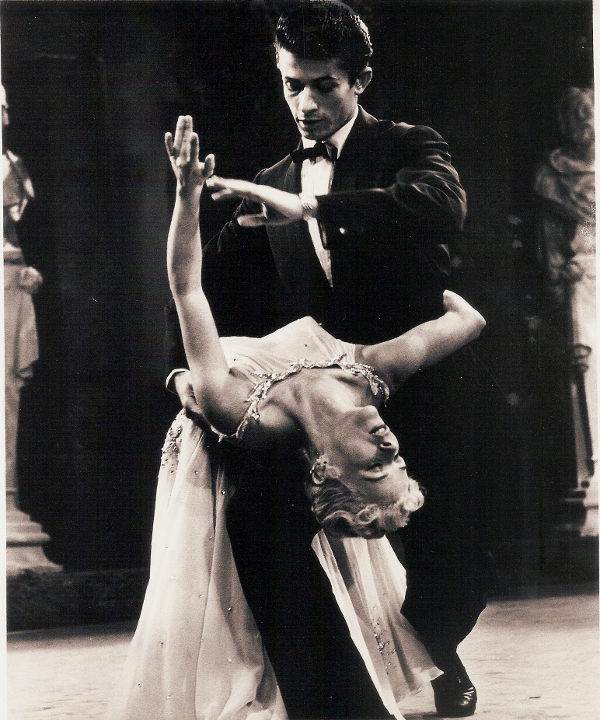 At Saturday’s “An Evening with George Chakiris,” at UCLA Film & Television Archive, we enjoyed footage of a vintage live television broadcast, “CBS ‘Ford Star Jubilee: You’re the Top, A Salute to Cole Porter'” which aired on October 6, 1956.

Among other great entertainers on the 90-minute live broadcast (Louis Armstrong, Dolores Grey, Shirley Jones, Gordon MacRae) a set of ingenues, Sally Forrest, then an MGM contract starlet, and the young George Chakiris performed a duet to Cole Porter’s “Night and Day.” 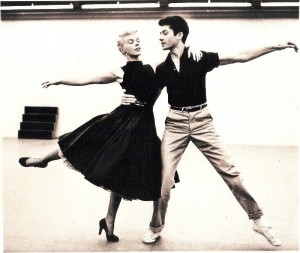 The choreographer for the song-and-dance sequence was Robert Alton (The Harvey Girls, White Christmas, There’s No Business Like Show Business, The Pirate).*

Chakiris, who delivered the Cole Porter signature tune in a lush and richly textured voice, shared with the audience at the Billy Wilder Theater Saturday night that at that point he had had little or no vocal coaching.

In two photos courtesy of The Academy of Dance on Film, we see Chakiris and Forrest, at right, in rehearsal and, above, in performance of the number.

*You’ve heard of those movies, right? Ever hear of Robert Alton? Probably not.