Who was Sally Forrest? Let’s watch her dance. 2 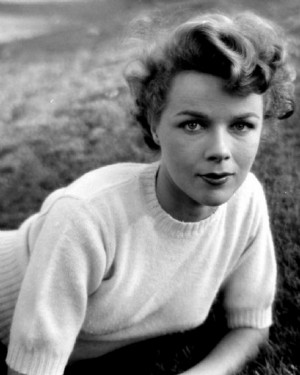 Katherine Sally Feeney, the daughter of amateur ballroom dancing parents, was born on May 28, 1928. Her father, Michael Feeney, a U.S. Navy career man moved his family to various naval bases, finally settling in San Diego where little Sally was born and began dance classes with Marguerite Ellicott at the age of 12.

“Miss Ellicott taught a wide variety of disciplines from ballet to ballroom in this beautiful hall that at night turned into a ballroom open to the public. During my last year in high school, Bud Melcher, the man who booked the bands for the ballroom, thought I should try my luck in Hollywood. So he and his wife, Bobbie, took me to audition at the casting offices of the major studios. MGM offered to put me under contract as a dancer.” (Classic Images, Spring 2000, “Stepping Out of the Chorus in a Big Way.”)

The 5′ 3″ redheaded seventeen year-old graduated from high school, moved with her family to Hollywood and began at MGM as a member of their dancing ensemble in 1945. From 1945-’48 she danced in the ensemble of Till the Clouds Roll By, Unfinished Dance, Fiesta, The Kissing Bandit, The Pirate, The Barkleys of Broadway, In the Good Old Summertime and Take Me Out to the Ballgame. Robert Alton, one of the contract choreographers at MGM, noticed her talent and she began assisting him as well as coaching such stars as Ricardo Montalban (for his dance with Ann Miller and Cyd Charisse in The Kissing Bandit). “Alton would play a key role in Sally’s early career as a chorus dancer and later in her television and nightclub career as a star performer.” (Classic Images). In 1948 when MGM’s profits dipped, her contract was ended.

While assisting choreographer Larry Ceballos at Columbia Studios and coaching actor Anthony Dexter in the tango for his title role in Valentino, one afternoon, after rehearsal, she met agent Milo Frank. At first, he was only interested in her potential as a screen actress and sent her a telegram offering to represent her. His interests soon became romantic, they began to date and Frank convinced her to change her name to “Sally Forrest.”

Her first acting role was in The Daring Miss Jones, a low-budget exploitation film, but in her next film, Not Wanted, actress-turned-director Ida Lupino cast her in a small but important role. Sally then co-starred in Lupino’s next film, The Young Lovers (aka Never Fear, in which she danced in her role as a polio-afflicted dancer) followed by Hard, Fast and Beautiful and Bannerline. Marrying Frank in August, 1951, Sally returned under contract to MGM, this time as a leading actress. After non-musical roles in The Strange Door, Mystery Street and Vengeance Valley, she got to use her dancing talents in Excuse My Dust, opposite Red Skelton and The Strip with Mickey Rooney (both released in 1951). When her husband took an executive job with CBS in 1952, she relocated with him to New York. There, she did stock, NY-based TV series and appeared on Broadway in The Seven Year Itch. Donald O’ Connor requested her to star opposite him in Call Me Madam at 20th Century-Fox, but the Broadway producers refused to release her and the role went to Vera-Ellen. In the mid ’50s, she and her husband moved back to Los Angeles, where she continued making films: Code Two, While the City Sleeps with her final feature film appearance being Ride the High Iron in 1957. 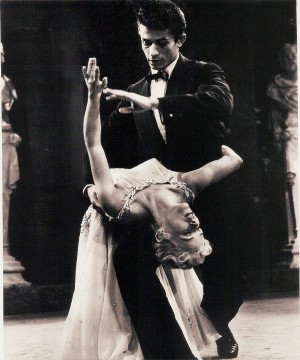 Soon after Forrest’s participation in “Ford Star Jubilee: A Tribute to Cole Porter,” in 1956, in which she danced with George Chakiris, mentor Robert Alton created a live version of the show in Las Vegas. He then created a nightclub act for the team which was originally booked for two weeks in 1960 at the Last Frontier Hotel in Las Vegas, but stretched into a record-breaking 14 weeks. Other song-and-dance musical stage appearances include Damn Yankees in Vancouver , B.C. and in 1974, she starred in No, No, Nanette at San Diego’s Starlight Theatre.

From 1951-59, she guest-starred on multiple dramatic television shows (“Studio One,” “Climax!,” ”Ford Television Theater,” etc.) with song and dance appearances on “The Dinah Shore Chevy Show,” primarily putting all of her energies into supporting her husband and his work. She was quoted in 1992 (Who’s Who in Hollywood): “I still take dancing lessons every day, because I enjoy it-and also something one has done all her life is hard to drop.” Her husband died in 2004 but Sally remains as one of the internet’s most popular pin-up girl. It is her dancing that needs to seen and honored.

2 thoughts on “Who was Sally Forrest? Let’s watch her dance.”