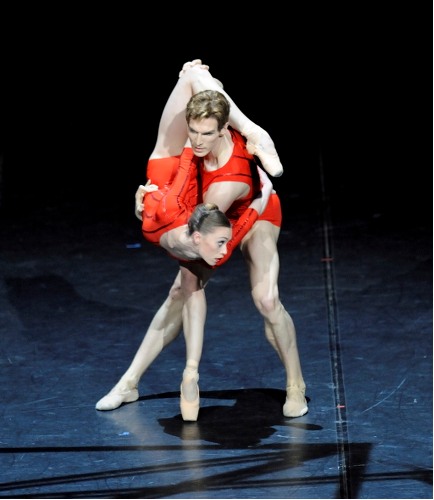 While The Taming of the Shrew, their John Cranko party piece, was allotted three of their five-night run, it was the Stuttgart Ballet’s “Made in Germany” program that put hardcore balletomane bums in seats.

Thirteen offerings, old and new, split into three segments. At three hours running time, not for the faint of heart and, a very, very mixed bill.

The old: two Crankos, one John Neumeier, the piped music not best enhancement to their lyrical styles and perhaps suffering from being extracted from longer narratives (Romeo and Juliet; Dame aux Camellias) and set onto a simple dark stage. It had me wondering if the dancers, all superb, had had the time to transition from the angular demands of the newer works to the character needs of the former.

The new repertory was aggressively 21st century, many of whose creators had been beneficiaries of the Stuttgart’s own Noverre Society Young Choreographers presentations. There was huge musical variety: Elvis, Shostakovich, Sarah Vaughn, Rossini, Johnny Cash, Schubert, a typewriter; the choreographic styles, too, a smorgasbord, from the extreme twitchiness of Stuttgart resident choreographer Marco Goecke’s Fancy Goods and Äffi; to the vogue and popping influenced fluidity of Edward Clug’s Ssss; the Troc-esque parody of Christian Spuck; the sinuous ambiguities of Demis Volpi; and the thrusting, flying athleticisms of Itzik Galili, Mauro Bigonzetti and Douglas Lee. 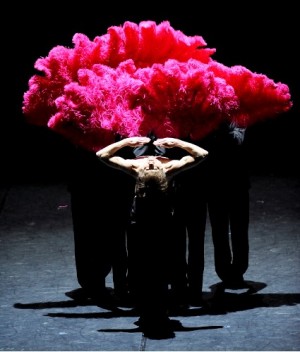 I was struck by the dancers’ profound musicality. In the newest works, much movement was in polyrhythmic counter to the beat or stretching the spaces between notes in unexpected directions. The company’s collective fat content was about 0.03%, the muscles and tendons of exposed male torsos both catalyst and participant for Goecke in particular. The women are hyper-extensive — lanky limbs explosive as well as enveloping — and tiny, far more tiny than I’m used to these days. Maybe fitting for the one-handed lifts and gymnastic, spiral-ing throws that are an exciting company trademark, but are they consuming any-thing more than nicotine and thin gruel? I pined for their bones.