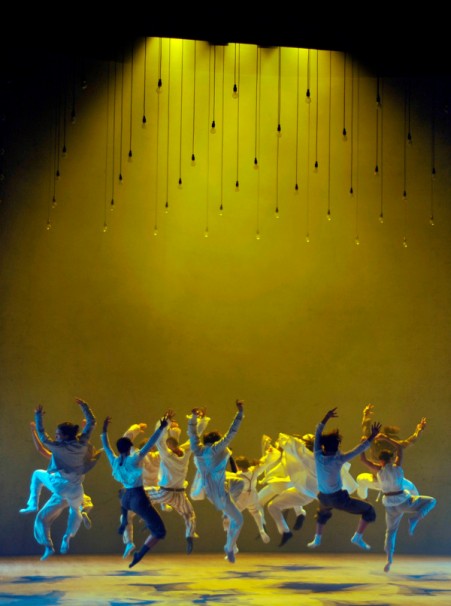 The big kahuna of London dance, the temple, is Islington’s Sadler’s Wells Theatre.

A place of entertainment for 300 years, dance became Sadler’s priority in 1928 when Old Vic manager Lilian Bayliss convinced Ninette de Valois to present the performances of what would eventually become the Royal Ballet (the English National and Birmingham Ballets started here as well.)

The ever-expanding Sadler’s prides itself in innovative offerings including Israeli-born Hofesh Shechter and the Moroccan-Flemish Sidi Larbi Cherkaoui, who debuted their newest works here one week apart.

I was a late-comer to Hofesh Shechter. I’d been hearing about him for years, but only took myself down the way in 2012 when Sadler’s was reprising his works Uprising and In your rooms.  Dark (literally and metaphorically), feral, muscular, LOUD.  Political Mother – The Choreographer’s Cut was scheduled just a few months later.  So I caught up. The nascence and anguish of violence. Middle Eastern folk meets urban meets parcour.  Dark, muscularity from both sexes (loving that).  LOUD.  LOUD. Shechter composes his own highly electronic music which he cranks to the max. Occasionally using my fingers as shields, so what, I left with every sense exhilarated and jangling, eagerly looking forward to Sun.

My sense is that Sun is still in a state of becoming.In a major departure, the stage is suffused with glorious light for the most part, with the dancers clothed in loose and lovely variations of a 18th-century French frolic. As in McBurney’s Magic Flute, Shechter is exploring the Enlightenment; but even amidst the light, as ever, Shechter ruminates on darkness, here the legacy of imperialism. While I wasn’t convinced that life-size hopping sheep cut-outs, a lurking wolf, a pith-helmeted colonialist, a loin-clothed native and a hoodie were the its best representation, there was still much to love in his pulsating circles, rolling hips and sinuous arms. The music was again Shechter’s loud,  pulsing electronics, laced with an occasionally bar of Abide with Me to shore up the 18th-century theme, with one cheery nod to the American Song Book with Let’s Face the Music and Dance. 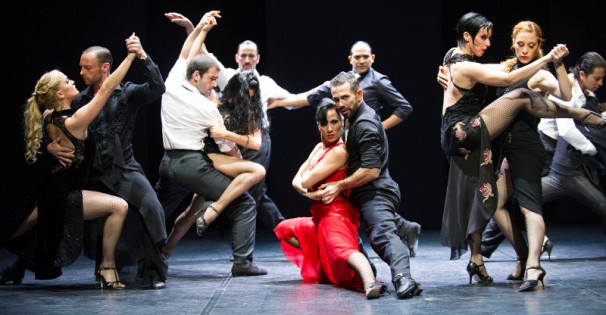 The following Sunday, Sidi Larbi Cherkaoui’s tango-based Milonga, named for the social dances that take place in intimate bars in Buenos Aires. An on-stage combo plays a mixture of traditional tango and contemporary soft jazz. We’ve been this way before, pace Café Muller from Pina Bausch, but all hail the difference between Mittel-Europäische Angst and Latin fire! With a cast of five tango couples from Argentina and two contemporary couple, Cherkaoui explores the shape, quality and texture of embrace and thereby intimacy.  Amidst the thrusts, bends, slashes and lifts of championship tango, a flowing current of juxtapositions and missed encounters; in addition to traditional heterosexual pairings, trios of miscellaneous combinations, with instants of bravado, sexual electricity, isolation, yearning, as well as the odd bit of humor.  Not life-changing, but overall a swell of satisfaction.  However… 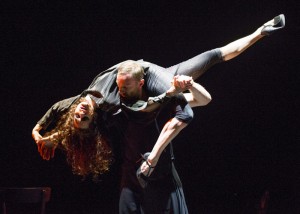 As the afternoon progressed I found myself obsessing on the ladies’ regulation four-inch and aptly-named stiletto heels. This is a very old contretemps, but as I watched those knives whipping back and forth at lightening speed, as I admired the erect and supple carriage, the semi-locked knees and impressive calves, my own knees whimpered in empathetic agony. Often during the climactic and powerful duet between contemporary dancers Silvina Cortes and Damien Fournier, Cortes was actually gripping those fetishistic weapons. I don’t feel this way about character shoes, lower, with a more accommodating toe box. Pointe shoes may wreak havoc on the toes but, it would seem at least, with more possibilities of self-regulated balance and control.

In the Shechter company everyone’s in socks, the power of woman most gloriously personified to me in the lithe-leaping strength and sensuous curves of Maëva Berthelot. As much as I enjoy, even celebrate, the slicing, fearless artistry and feline sexuality of tango women I do know which image of woman I prefer.