“Nebraska” tries too hard to be loved 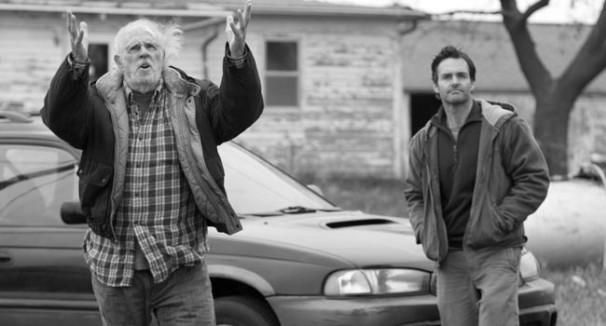 As written by Bob Nelson and directed by Alexander Payne, “Nebraska” is a movie couched in two attitudes—warmth and stubbornness. The former is meant to soften the latter, the latter meant to put some edge on the former.
Like Lee Marvin’s Walker in “Point Blank” who goes after the mob for the $93,000 he’s been bilked out of, Bruce Dern’s old codger Woody stubbornly wants to go from his home in Billings, Montana to Omaha so he can collect the $1 million sweepstakes cash he believes he’s won. The slightly denuded black-and-white cinematography of Phedon Papamichael underlines Woody’s single-mindedness with its plain, straight harsh lines to the horizon. Dern’s performance is a fine study in an old guy as a hard rock who can’t be cracked.

“Nebraska” also wants, sometimes desperately, to be loved. Woody—his drinking fueling his senility—is a royal pain to his sons David (Will Forte) and Ross (Bob Odenkirk), and his wife Kate (Jane Squibb) has written him off as a stick in the mud who should be deposited in a home. But he’s always framed as an adorable pain, an object of sympathy. The story is really David’s, as Nelson’s heartland saga is concerned with sons coming to understand fathers even when the fathers don’t or won’t understand them back.

Payne is an American director admired for his affection for his American characters—even the “bad guys” in his movies are never so bad, and true to the Jean Renoir code, everyone has their reasons—but he has an unfortunate tendency to abruptly turn on the spigot of comedy when the drama is getting too much. His first two movies, “Election” (also set in Nebraska) and “Citizen Ruth” (starring Bruce’s daughter Laura), were slightly caustic but good-natured satires, and didn’t suffer from this problem.

Ever since “About Schmidt,” and never more so than in “Nebraska,” the calculated wheels of comedy loudly whirr in the foreground. By all reports, Nelson’s original script kept the comedy to a low volume, while Payne’s additions amped it up. The intent may have been to add warmth to a pretty sad tale, but the result is broad manipulation when simple, human storytelling—say, in the vein of Richard Ford—would have been enough.