Nov
17
2013
Filmrakhshan banietemad redcat see you tomorrow elina! the hidden cost of violence we are half of iran's population
by robert koehler 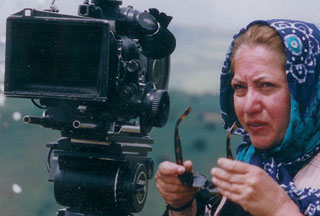 Among its countless ethnic/national communities, Los Angeles has Irangeles, the sprawling Iranian diaspora that extends from Encino to south OC and amounting to the largest group of Iranians outside of Tehran. Yet the city curiously seldom sees visiting major Iranian filmmakers. REDCAT is helping counter this odd pattern Monday with the presence of the country’s leading woman of cinema, Rakhshan Banietemad, with a fascinating program titled “The Hidden Cost of Violence” (8:30 pm).

Banietemad started in documentaries for television, but since 1992’s “Nargess,” she’s jumped back and forth between fiction and non-fiction with a fluidity and audacity that compares only to Werner Herzog. She’s even made two films with the same title (“Under the Skin of the City”) dealing with the same issue (Tehran’s parabolic rise in drug abuse), one as narrative, the other as non-fiction.

At REDCAT, the emphasis is on the non-fiction. “We Are Half of Iran’s Population” was shot on video during the combustible 2009 Presidential elections, following a coalition of women’s right activists. “See You Tomorrow Elina!” is a world premiere of a more personally framed work, as Banietemad revisits the kindergarten classroom attended by her daughter Baran 20 years before, linking the images of the Iran-Iraq war as experienced by Baran with images seen by school kids of the bloody protests that erupted after the 2009 elections. Hers is a cinematic question: What effect do images have on the young mind?