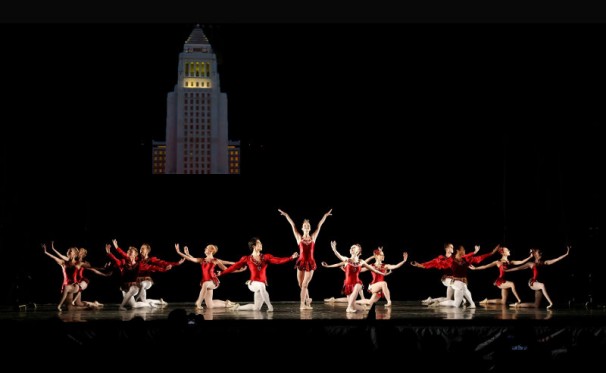 Perhaps it was City Hall — imposing, authoritarian, standing “at attention” behind Grand Park’s platform stage — that riveted the crowd. People were afraid that if they misbehaved, they’d get busted.

Or blame it on Balanchine. A huge throng of more than 3,000 respectful onlookers serenely watched Los Angeles Ballet present a double-bill of works by the Russian-born choreographer of New York City Ballet on Saturday. It was part of the Music Center’s free-to-the-public outdoor presentation series in our still-new urban park.

The brilliant dance invention of the long-departed Balanchine commanded the focused attention of even the most casual of picnickers. 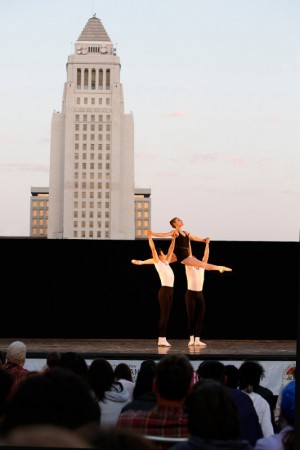 Two of the maestro’s great creations were offered: First came “Agon” (1957) Balanchine’s miraculous black-and-white jigsaw-puzzle-vivante, set to a thorny commissioned score by Stravinsky. Then, in a flush of red, came “Rubies” (1967) the middle bit of the full-length “Jewels”: playful, regal, magnetic, and also set to Stravinsky.

The program suited our cinema town. First we had black and white; then we had color.

The public’s embrace of the ballet be-in astonished even the Music Center’s Director of Programming Renae Williams Niles, who introduced the performance. Picnickers arranged their blankets in a colorful checkerboard along the gently graded hill. Viewers covered all sit-able space — all to watch classical ballet!

Lending the evening a cozy vibe was audience patter from L.A. Ballet co-artistic director Colleen Neary, the former New York City Ballet principal dancer who along with husband Thordal Christensen runs the company. Neary nattered charming Balanchine nuggets: She imitated his nasal twang and how he called everyone “dear”; she recalled his i.d.’ing ballerinas by their perfume and his dispatching her to study jazz dance with Luigi.

I especially appreciated Neary’s mentioning Balanchine’s life in Los Angeles and his choreography for “The Goldwyn Follies” (1938) on his then-wife Vera Zorina.

It shows that the troupe has been on an aggressive performance schedule in traditional theaters around town. They have improved.

Even on an outdoor stage, a relatively insecure performance platform, the female contingent, in particular, took every available risk; thrusting long legs to perilously high extensions and stabbing at the floorboard with precise pointe work.

“Agon” was the better danced of the ballets; its visual concepts, stark shapes, and extreme modernity seemed more under the company’s command. “Rubies” lacked that big-picture grasp and when the full cast was on stage, it veered into messiness. The men lapse in and out of finesse in their arm placement, straying into a kind of in-between vee that isn’t quite ballet classicism. I like Kenta Shimizu’s on-stage energy; he’s such a nice dancer and a noble partner to Allynne Noelle and Julia Cinquemani. Both women brandish rock-solid technique and the right mix of passion and sublimation of ego that suits Balanchine’s work.

The company was heroic coping with what the park stage had to offer; entries and exits were notably tidy and professional. A great dance night in Los Angeles, resulting in an appreciable notch upward in the city’s dance IQ. 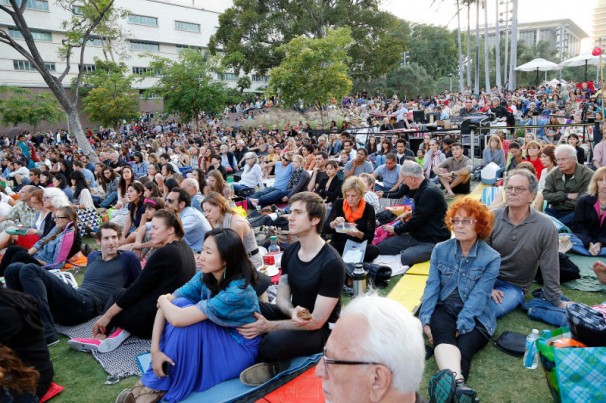