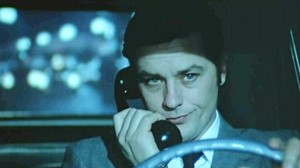 Alain Delon plays a French cop (“un flic”) who spends his days and nights chasing criminals, but doesn’t see the crook right under his nose.

Simon (Richard Crenna) a smooth nightclub owner, works with a small crew to execute daring heists with big payoffs, while the la belle Cathy (Catherine Deneuve) shares her ice-queen version of love between the two guys. 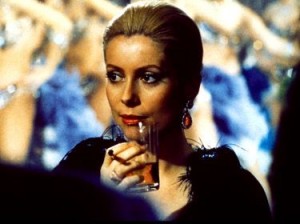 (Bob Le Flambeur, Army of Shadows), his thirteenth and final film from  1972 doubles-down the ice-blue look that had been the director’s signature in Le Samourai and Le Cercle Rouge, both starring the always cool Delon.

We love Delon in “Plein Soleil,” the French film noir based on “The Talented Mr. Ripley.”

The grizzled Crenna prefigures Nick Nolte’s performance in “The Good Thief,” a film we admire that’s based on Melville’s “Bob Le Flambeur” and was written by Melville.

“Un Flic.” Such a good movie. What you go to the movies to see. So go.