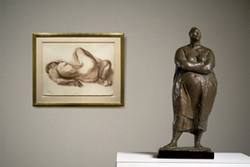 We’re very excited to get into the mix at Jack Rutberg Fine Arts Saturday night. The highly respected gallery on La Brea Avenue just north of Beverly Boulevard is hosting an evening that’s all about love of the arts.

The main event is the opening of a centennial tribute to Mexican sculptor and painter Francisco Zúñiga. Representatives of two consulates, those of Mexico and Costa Rica, and their guests, will join the fiesta, to celebrate the Costa Rican-born Mexican artist.

Works presented in the show offer an overview of Zúñiga’s extraordinary oeuvre. Zúñiga’s celebration of the female form as an elemental force – sometimes maternal, often sensual, but always heroic, go beyond their pure physicality; this exhibition makes clear the subtle nuance that distinguishes each work. As in his sculptures, the drawings of women – matriarch or adolescent – are imbued with a reverential calm and often stoic power that affirm Zúñiga’s mastery of the human figure. 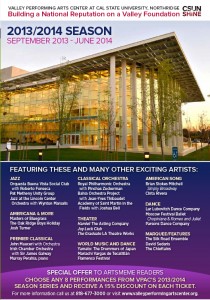 And there’s more … it’s a party to mark arts·meme‘s fifth birthday. Party people who read the arts blog will join in the fun.

Also participating is L.A.’s newest world-class performing arts center, the Valley Performing Arts Center, a jewel box of a fine arts performance palace on the campus of Cal State, Northridge. The VPAC is offering a special discount on ticket packages for their 2013-14 season for arts·meme readers.

Says Rutberg: “As the exclusive agent of the Zuniga estate, I’m proud to present this important exhibition of one of the 20th century’s most distinguished and revered sculptors.” 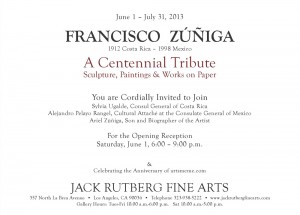 The show, according to Rutberg includes, “a formidable exhibition of sculpture, paintings and works on paper by this major 20th century Latin American artist.