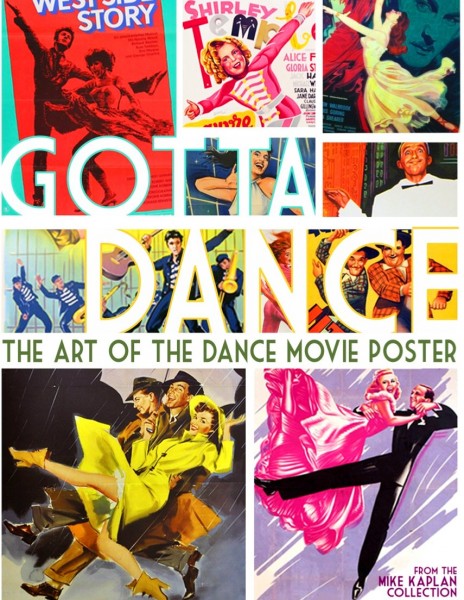 We’re super looking forward to touring through a wonderful installation of dance movies posters now on display at Barnsdall Gallery Theater. We already saw it once, but it’s so fabulous that repeat viewings are called for.

Twenty distinct pieces in varying sizes and rarity comprise GOTTA DANCE!, the majority dating from the golden age of movie poster design, 1930 to 1950. Many come from overseas, where for a longer period, artwork and illustration prevailed, which collector Mike Kaplan believes elevates both the essence of a film and its poster art.  They signify the movie’s finest poster, regardless of nationality.

Design aesthetics and historic significance are the standards of the collection and the exhibition. Major musicals are on view, from the Italian Singin’ In The Rain (1952) and the French Seven Brides For Seven Brothers (1954) to the Belgian Funny Face (1957) and the  East German West Side Story (1962), the latter represented by the only poster to highlight Oscar-­‐ winners Rita Moreno and George Chakiris. Danny Kaye as The Kid From Brooklyn (1946) is at the center of the colorful French stone litho by Bernard Lancy, surrounded by a chorus inspired by Toulouse Lautrec.

Signature pieces include: an original French-­‐release poster for An American in Paris (1951), previously owned by Gene Kelly; a young, two dimensional James Stewart prominently dancing with three dimensional Eleanor Powell in Born to Dance (1936); an immaculate image of Fred Astaire and Ginger Rogers in elegant evening attire for Carefree (1938); Mickey Rooney and Judy Garland in caricaturist Al Hirschfeld’s design for the rare American 40×60 of Strike Up the Band (1940); and the only poster to spotlight The Nicholas Brothers, executing a dazzling, acrobatic tap routine on the Italian single folio for The Great American Broadcast (1941).