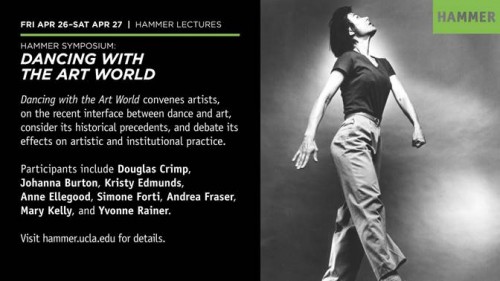 This weekend, the Hammer Museum presents Dancing with the Art World, a two-day symposium that convenes artists, choreographers, curators, and historians to reflect on the interface between dance and art, consider its historical precedents, and debate its effects on artistic and institutional practice.

Dance has long intersected meaningfully with the visual arts. But in recent years, there’s been an explosion of dance being presented in an art context. From Move: Choreographing You at London’s Hayward Gallery (2008) to Dance/Draw at the Institute of Contemporary Art Boston (2011) to Danser sa vie at the Centre Pompidou in Paris (2012), landmark exhibitions at major museums have explored the relationship between dance and the visual arts.

The Hammer itself has been extremely hospitable to dance; we recently saw separate performances by Judson Church stalwarts Simone Forti and Trisha Brown Dance Company on the museum’s grounds and in its galleries. Benjamin Millepied and friends twirled around MOCA recently. LACMA, too, hosted a performance of L.A. Contemporary Dance Company at the Bing Theater; even more significant was the museum’s Sharon Lockhart | Noa Eshkol exhibition, a collaboration of dance and video art.

The Hammer symposium, organized by Hammer Museum and the UCLA Department of Art, fields a rich cadre of brain-and-body specialists to parse through the opportunities and challenges of dance as the new-found object of fascination in art. Or is it so new?