It can be sweaty, painstaking, unglamorous. The steps are stymieing when they won’t knit together. You’re half dancing, half hanging around. It’s always the same people; they never go away. It takes incessant tweaking to get it right. Welcome to the art of choreography, a labor-intensive affair that requires real-time interaction, patient collaboration.

This honorable adventure happened last week in a dance studio at the edge of downtown Los Angeles. The room — white-walled, black-Marley-floored, strewn with ladders, scaffolding and other construction leave-behinds — was workplace to visiting artist Kyle Abraham. The hugely in-demand Brooklyn-based choreographer has been setting a new work on the happening L.A. dance troupe, BODYTRAFFIC. 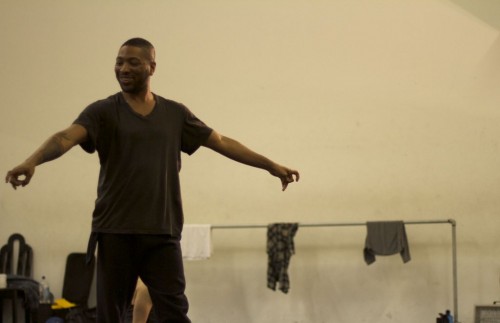 Lots of continental criss-crossing set up the commission. Abraham was at REDCAT delivering “The Radio Show” in October 2011 when BODYTRAFFIC co-directors Lillian Barbeito and Tina Finkelman Berkett first invited him, hope against hope, to work with their burgeoning company. Then the BODYTRAFFIC’kers started showing up in Abraham’s neck of the woods, booked three times, at various festivals and events, at the Joyce Theater dance-mecca in Manhattan.

Barbeito and Berkett earn bonus points for getting onto Abraham’s calendar early. Because in 2012 his career took off. He was honored with the Jacob’s Pillow Dance Award during the festival’s 80th anniversary season. He was named as one of 54 United States Artists. And he’s in the first of a two-year stint as Resident Commission Artist for New York Live Arts, relishing a perk that should be standard but just isn’t: an annual salary.

“The thing I like most is having an office,” says the affable Abraham. He’s chit-chatting during rehearsal lunch break. “I have a desk,” he says giving off a feeling that can only be labeled happiness. “And my own cubicle. I don’t have to work out of my house. I have somewhere to go.” 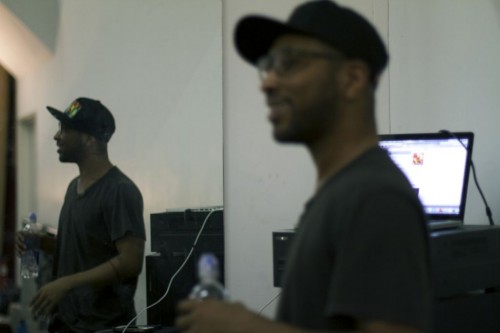 Abraham, who earned his dance degree from Purchase College, SUNY and a master of fine arts from NYU’s Tisch School of the Arts, raps brightly about a favorite subject, music: “I’ve been listening to drumming,” he says. “Max Roach, and of course Art Blakey [the jazz drummer whose rendering of Dizzy Gillespie’s “A Night In Tunisia” Abraham recently used for “Another  Night” choreographed for Alvin Ailey American Dance Theater].”

A pair of cool Max Roach spectacles reinforces Abraham’s thoughtful demeanor: “I have to tell some dancers that the action’s not on the beat; drumming’s just the impulse, it’s a vibe.” Shifting from the arcane to the street, he admits, “I’ve even been listening to beating on buckets, turned over.”

Drumming may come into play for his upcoming commission for Wendy Whelen, the senior-most and most infinitely rapturous of New York City Ballet’s principal dancers. The duet will be a gala highlight at Jacob’s Pillow Dance Festival’s season opener June 15. Even the notion of working with a hallowed ballerina reveals Abraham as a cool pro: “We’ve already had two ‘play dates’ to see how my material looks on her. I may put her on pointe, or perhaps on soft [ballet] slipper,” he muses, “or maybe barefoot,” adding, “she has nice feet.”

BODYTRAFFIC dancers Melissa Bourkas, Guzmán Rosado and Andrew Wojtal pile into the studio, re-joining Abraham, Barbeito and Berkett for the afternoon session. Abraham rehearses the astonishing amount of material he’s created in just two days of work. Watching, he calls out, “Beautiful.” He stands to demonstrate a body wave, his arms curving near his torso like a pair of parentheses. “When you do this,” he says, still undulating, “why not go into a high arch?” he says, tilting his face toward the sky.

Wojtal, slender, red-bearded, takes a stab at it.

“Yeah, I love it,” the dancer responds.

A trio of dancers perch lightly, poised to skitter like roadrunners. Abraham looks their way. Every ear in the room is piqued. “You know the material you do with Mel going this way?” the choreographer asks, then faces the other direction, “Now can I see it going that way?”

The dancers comply. It’s the old inside-out, upside-down flip-flop. An even bigger puzzlement: Abraham has not yet selected his music. So far the dance exists only in steps; a sound score will come later. BODYTRAFFIC, on command, spools the choreography, first, to supersonic contemporary chamber music by an Icelandic composer. Then they do it to a nasty rap song whose lyric gets stuck on the “F” word. Finally Abraham puts on “a house, dancey sound [that] I sometimes teach to,” he explains to no one in particular. The bubbly beat pokes the dancers like a vitamin-B shot. The energy level in the room ramps up.

Up wonks the dance lingo as well. Says Abraham, “Let’s spend time working where the trio is joining this material. Just go from the fourth [ballet foot position]. If we are doing it turning-wise, it’ll work.” Addressing a brown-haired duo, Berkett and Rosado, who stand at left, Abraham instructs: “You two: up up down down. When you finish, join in, you know, hop, skip, five. Now go from the fourth again.”

The dancers calmly absorb the onslaught of instruction. One asks, “Do you want a specific direction?”

Noodling with his laptop, Abraham replies vaguely, “No not yet.”

The dancers plunge in. Abraham motionless in his seat watches, his expression blank except for active eyes that flit from body to body. “Can we go from the fiver thing?” he asks. “It got trigger happy. Think Doug Varone.” 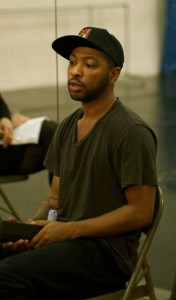 Upon arrival in Los Angeles, Abraham created three duets. These he transferred to BODYTRAFFIC immediately. For efficiency’s sake, he video-recorded a solo and handed it off via an IPad. The dancers cull yet another slab of choreography directly from the video-camera monitor. Slowly slowly the creation swells.

The afternoon wanes and the air in the fluorescent-lit dance studio feels un-fresh. “Y’all look good,” notes Abraham, his slight drawl kicking in perhaps from fatigue. “I need to make a thing to lock that down and get to Lillian’s solo. Do it one time without the music …  just so we can physicalize it?” he asks, his voice rising with the question.

The answer may have to come the following day. Barbeito, high at day’s end from the collaboration, bubbles with praise for Abraham: “He’s so real and intelligent and he does so much research. His work is politically charged and he really does believe and need to express himself through movement. Kyle has so much going on. And it all comes from his roots. He’s very passionate and generous. He comes off as nonchalant. But he’s not.”