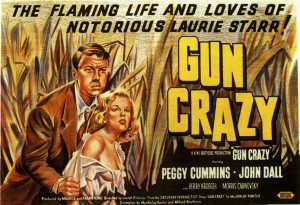 The film noir cult classic is a stylish example of the doomed-lovers-on-the-lam prototype; it anticipated “Bonnie and Clyde” two decades hence.

The screening of “Gun Crazy” opens the UCLA Festival of Film Preservation 2013.

Appearing in person at what will surely be a fun evening will be Russ Tamblyn, credited at age 14 as “Rusty” Tamblyn playing the lead character as a boy.

A normal, well-adjusted American lad, Bart ports a harmless love of guns. This gets him busted by a society that just doesn’t understand! He’s dispatched to reform school. 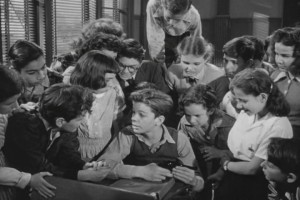 Grown up, still a nice guy but kind of a loose cog, Bart (now played by actor John Dall) hooks up with blonde carnival gal Peggy Cummins, herself a sharp shooter with a healthy dose of pistol admiration. (We saw Cummins in person at last year’s TCM Fest.) The two go on the lam as bank robbers.

It’s pulpily written, torridly performed, and a wild visual ride as a movie. A hugely important film, the darling of cineastes, it’s sure to be a fun night at the Archive. Following the film, Archive Director Jan-Christopher Horak will interview Tamblyn, lately seen in the Quentin Tarantino shoot-em-up Django Unchained.