“I never owned one and could care less about guns,” said the gentle-spirited Russ Tamblyn before a sold-out house at the Billy Wilder Theater on Friday night. The conversation with Shannon Kelley, Director of Public Programs for the UCLA Film & Television Archive, followed a screening of cult-classic, GUN CRAZY (Monogram Pictures, 1950). Tamblyn, then a kid actor credited as “Rusty,” played a supporting role.

A restored print of the soul-throttling film-noir, which concerns an outlaw couple who bond over their mutual affection for artillery, provided a jangling opening night choice for UCLA Festival of Preservation 2013.

In GUN CRAZY, Russ Tamblyn plays a good little boy raised by a single mom; one troubling detail, he gains self esteem by popping off pistols. “I did this movie when I was 14 years old. I’m 78 now. That’ s 64 years ago. But the movie really holds up. It has that hokey-pokey magical thing to it,” said Tamblyn. 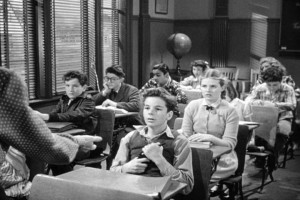 “It was my favorite movie for years. Peggy Cummins just knocked me out,” he said.

Since his scenes did not overlap with those of the film’s stars, John Dall [he plays Tamblyn as an adult] and Cummins, Tamblyn’s predominant memories concern the director, Joseph H. Lewis.

“It was great to work with Joe Lewis. They called him ‘Wagon Wheel Joe’ because he did all those “B” movies, shooting through a wagon wheel.

“He gave me enough little tidbits to pull it off [playing a gun-crazed little boy] Joe was the first director to really give me direction.

“Joe actually became my mentor. After GUN CRAZY Joe was going to do another film, RETREAT, HELL!  (1952). The studio [Monogram] did not want me. Joe said ‘I am not doing the picture without him.’ When it was done, he showed it to Dore Schary and MGM signed me under contract.” 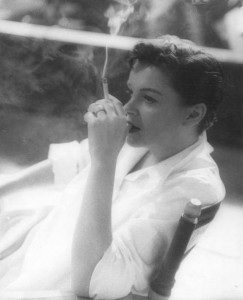 Tamblyn was not only the director’s protegee, but a personal friend: “I knew him pretty well. I used to go to his house – a lot. Joe had a huge mansion – a big, big house, with a big swimming pool in the back [yard]. It was across [Sunset Boulevard] from the Beverly Hills Hotel. He lived well. But the living room, you weren’t allowed to go into it; it was roped off. So we hung out by the pool where there were chairs and a BBQ.

“His daughter Sandy and I were close friends. One time I got there and Sandy said, ‘Oh my god! Judy Garland [she lived next door] flipped out! She was lighting cigarettes and burned up the house!” So we snuck along a fence and stared into the bedroom; it was all burned up.

“Later, I worked for Vincente Minnelli. I never mentioned it to him.”

In order to master gun play, Tamblyn learned from the best: “Glenn Ford turned me on to fast drawing. You know who [else] was great? Sammy Davis,

Jr. was an unbelievable fast draw, he was so fast.”

Tamblyn still works, most recently appearing in a cameo role alongside his actress daughter Amber in DJANGO UNCHAINED. Said Tamblyn: “[Director] Quentin Tarantino told me that GUN CRAZY is one of the better of my movies that he likes. He also likes SON OF A GUNFIGHTER (1965). It’s a terrible movie! In our DJANGO credits, Quentin lists me as Russ Tamblyn, son of a gunfighter, and he lists Amber as ‘daughter of son of a gunfighter.'”