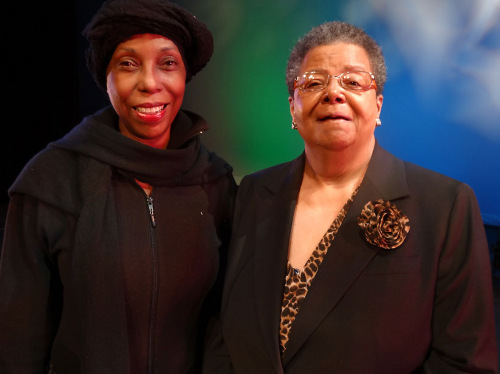 Elizabeth Eckford, one of the original Little Rock Nine, was on hand January 31 at Stuttgart, Arkansas’ Grand Prairie Center when Lula Washington Dance Theatre performed its dance suite about the nine high school students who integrated Central High School in 1957.

After the concert, Ms. Eckford thanked Lula for her work, calling it wonderful and moving. She then rushed to meet Khilea Douglaiss, the dancer who portrayed Ms. Eckford’s historic solo walk through an angry mob of protesters who cursed her, spit at her, threatened her life, and urged her to go back to Africa instead of into Central High.

“Ms. Eckford came up to me afterwards and hugged me and told me how much she loved my performance. She said I understood what she went through that day. I was so moved,” said Douglass. “I was standing in the face of history.”

Khilea said dancing the Eckford role in Lula’s “Little Rock Nine” work was a difficult challenge.“That was the most intense dance I have ever done,” recalls Khilea, a former member of the Alvin Ailey American Dance Theatre for six years.

“I had to make the audience feel what Elizabeth must have felt that day, the fear, but also the courage to keep going. I had to make them see and feel the crowd and the risk she was taking. It is a powerful dance. Lula’s work gives me those kinds of challenges – which I love. And for Ms. Eckford to be there in person — it was amazing.”

Elizabeth Eckford was among a large group of people with deep roots in the civil rights movement who attended the dance company’s concert near Little Rock.

— Erwin Washington, on the road with LWDT