Animated women of film-animation world step out — in gallery show

“Ladies of Animation,” a gallery exhibit featuring personal works by female artists from major film studios including Disney, Pixar and Dreamworks opened a few days ago at GRspace. 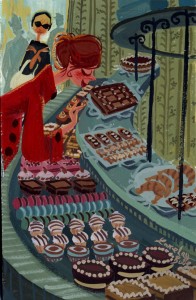 The women’s contributions span many disciplines within the world of animation from the design of feature characters to story and visual development in films such as Tangled, Wreck-It Ralph, Frankenweenie and Paperman. Their work extends beyond the studios into toy design, graphic novels and advertising.

Gennie Rim, former artistic manager at Pixar and Disney who has curated the show says, “These women are world-class talent, and their personal work should be seen and recognized within the community of animation, and also within the world of fine art.”

Ladies of Animation | GRspace | thru March 2