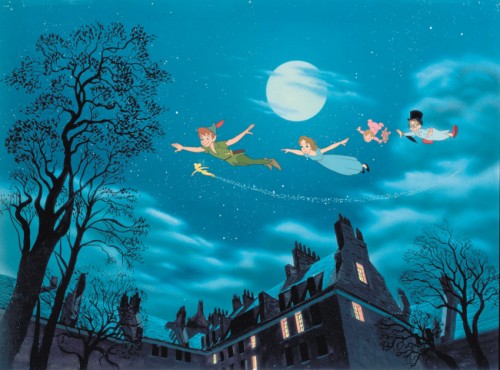 “I taught you to fight and to fly. What more could there be?”
― J.M. Barrie, Peter Pan and Wendy

Maltin, one of our top film experts and a cartoon specialist, holds a special affection for “Peter.” Writes Leonard, in an email:

There have been many interpretations and variations on Peter Pan over the past century, but to me Walt Disney’s version stands apart from the rest—even though I like others, too. It manages to make the imaginary ingredients of Barrie’s play tangible onscreen without removing their magical quality. I also love the music!

In conversation with Leonard will be Kathryn Beaumont (voice of Wendy), Margaret Kerry (live-action reference model for Tinker Bell) and Ted Thomas (son of legendary Disney animator Frank Thomas and director/writer of the acclaimed documentaries “Frank and Ollie” and “Walt & El Grupo”).

Also on the bill —  live on-stage frolicking by the lead character from Disney Junior’s “Jake and the Never Land Pirates.”  Bring it on, Jake!

I’m attending, and dedicating the evening to twenty children who cannot be with us tomorrow night. They will be in our thoughts.