So come with me, where dreams are born, and time is never planned. Just think of happy things, and your heart will fly on wings, forever, in Never Never Land! — J.M. Barrie 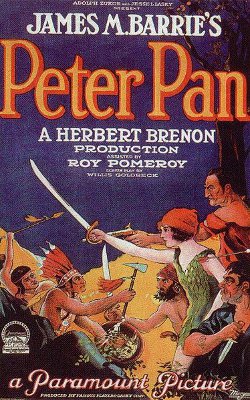 The über-gorgeous Anna May Wong plays (an American Indian) Tiger Lily in this early version of the James M. Barrie tale.

An L.A. girl from her birth here in 1905 till her death in Santa Monica in 1961, Wong ranked among early cinema’s top exotic beauties. Her screen persona was distinctive and, in retrospect, controversial.

In 1935 MGM refused to consider Wong for the leading role in THE GOOD EARTH, instead casting German-born actress Luise Rainer to play O-Lan in “yellow face.” The lovely Luise was just honored at last month’s TCM fest.

Anna May Wong’s story is beautifully told in a documentary that aired in 2008 on Turner Classic Movies. 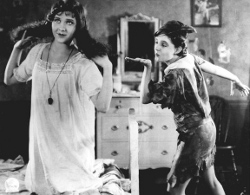 — and that’s saying a lot in view of its hard-boiled Clifford Odets dialogue and great performances by its two leading men.

Leonard Maltin, who always does a fantastic job, will host the “Peter Pan” screening at the sumptuous and tasteful Orpheum. Organist Robert Israel will thump on the vintage theater’s mighty (original) Wurlitzer.

This theater has 2,000 seats. Repeat: 2,000 seats. Wait till you see the throngs of Angelenos queuing outside this grand remnant of Broadway’s prior glory, when the boulevard was home to eleven movie palaces.