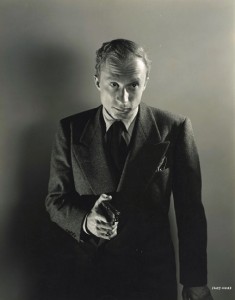 “Music to my ears,” cooed veteran stage and film actor Norman Lloyd in response to the fervent applause that greeted his appearance at Hollywood Heritage’s wonderful “Night at the Barn” lecture series held at the DeMille-Lasky barn.

Much as he loves to play, Lloyd also loves to work. He was a workhorse of old Hollywood, playing myriad lead and character roles and then capping off with a second career producing high-quality early television programs.

The elegant Mercury Theater trouper parried questions following a screening of “Who is Norman Lloyd?” a documentary that recounts Lloyd’s move from the New York stage directly to head up the cast of Hitchcock’s SABOTEUR (1942). It then traces his varied and prolific film career up till the Hollywood blacklist. Lloyd claims he was targeted due to his close professional association with director Lewis Milestone.

Theater producer-director John Houseman was the mensch who cared for Lloyd and his wife during the bad years. Lloyd eventually returned to Hollywood, but repaired to the other side of the camera, working as associate producer of 171 episodes of television program “Alfred Hitchcock Presents” (1957-62) and then again “The Alfred Hitchcock Hour” (1963-65). Impressive.

A great raconteur himself (his old-school elocution stems from boyhood lessons in Brooklyn), Lloyd described Hitchcock’s zest for story telling, intimating that it was the story that drove Hitch. He also remembered that the British-born director was not a big fan of Method acting. “Why am I sitting down?” Lloyd recalled a young actor once querying Hitch, then gleefully affected a perfect Alfred Hitchcock drawl: “To put your ahhsss on the chair.” Repeating the story twice, it was evident Lloyd tremendously savored the punchline.

Lloyd ruefully recalled the edgy improvisations of playing scenes with Welles as Cinna the poet in the celebrated 1937 anti-fascist Mercury Theater staging of Julius Caesar — the same production recreated in the recent biopic ME AND ORSON WELLES (2008).

Lloyd did not like the movie, however. Why not?

“I didn’t like the book,” he said bluntly. He graciously conceded that Christian McKay’s turn as Orson Welles ‘”is an amazing performance. He is absolutely a twin,” then added, “Everything otherwise is wrong. I hate the mock solemnity with which they treat the theater.”

[Lloyd most recently appeared in Curtis Hanson’s well received IN HER SHOES (2005).]