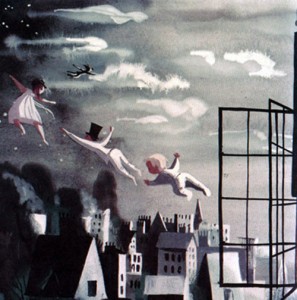 At last night’s panel discussion of Walt Disney’s animated classic, “Peter Pan” (1953) (the new blu-ray version is now playing at Hollywood’s El Capitan Theatre), we learned about the film’s core group of animators. Walt Disney jokingly referred to this crew not as “Pan-imators,” but rather as his “Nine Old Men.”

The expression puns on a way of referring to the Supreme Court before the advent of Sandra Day O’Connor. The joke stuck, in great part because the animators were all young guys in their 30s and 40s.

Ted Thomas (son of Frank, one of the Nine Old Men) shared with the audience his feeling that his childhood had been special, growing up in the magic circle of the creative folk who clustered around Disney Studios.

Omitted from the conversation (granted it was not intended as a comprehensive presentation) was an artist who provided color schemes and other key conceptual input to her male colleagues.

Her name was Mary Blair, and her “Peter Pan” credit is as the film’s “color stylist.”

[The Academy of Motion Picture Arts & Sciences honored Blair in 2011. Susan King wrote about the event in the Los Angeles Times.] 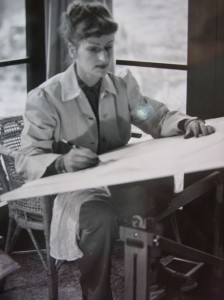 Dance writer Mindy Aloff in her marvelous “Hippo in a Tutu” (Disney editions, 2008), which analyzes and celebrates dance in the Disney studio’s work, shares Blair’s preliminary sketches for “Peter Pan”‘s Indian dance in her book.

Blair’s rendering of Indians avoids the cliched “red” skin. (The film eventually adopted that color scheme; indeed, a little boy sitting behind me gasped, “red skins!” when the Indians came on screen.) Blair, by contrast, in her sketches goes an entirely different direction. Her dancing Indians are surreal: purple-skinned, smiling figures who shimmy in the glow of a green moon. So here we have a lady who saw color unlike the rest of us.