A concert that culminates with the great lyricist Alan Bergman crooning in aching nostalgia The Way We Were, a song that he, his writing partner and wife Marilyn, and composer Marvin Hamlisch co-wrote for Barbra Streisand, is an event I’m interested in attending. Bergman is so special, a poet, really.

The Pasadena Symphony’s high-quality tribute to Hamlisch — he died August 6 unexpectedly and well before his time — gave so much more. The gala affair at the Ambassador Auditorium this past Saturday night paraded strong talent — Hamlisch commanded the loyalty and attention of a top group of singers — in a charming variety-show format. At its core, the evening offered abiding affection for the American Songbook to which Hamlisch devoted his career. 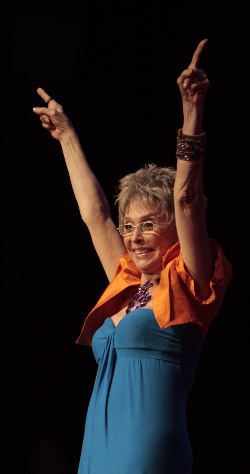 Coming last on the program, the Bergmans made a lasting impression. Marilyn, in an emotional spoken tribute to her fallen colleague, relished “the special bond that exists between a composer and lyricist.” Hamlisch, she noted, “was a uniquely funny man” who “could have been a stand-up comic, an ambassador, or played second base for the Yankees.” However, she quipped, “his mother made him practice.”

Her husband followed. Slender in a suit and tie he warbled in a tremulous but pitch-perfect voice:

What’s too painful to remember we simply choose to forget.
So it’s the laughter we will remember,
Whenever we remember,
The way we were.

This concert-capper took place at the intimate Ambassador, where stellar acoustics top off a dreadful purple carpet. California-style receptions (outdoors!)preceded and followed the show. The night’s marvelous edge of glamor came when the ever-effervescent Rita Moreno sent Hamlisch a love letter in the form of Kander & Ebb’s ”Broadway My Street” and Irving Berlin’s “I Love a Piano.” Introducing Moreno with a droll tale of their recent hand print ceremony at Grauman’s Chinese Theater was her still-handsome West Side Story co-star George Chakiris. 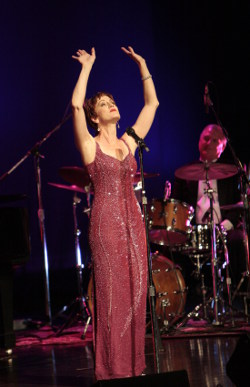 Saloon-style singer Mark McVey anchored the roster with a medley of four Hamlisch ditties. Its high point, “What I Did for Love” enjoyed Russ Kassoff’s strong piano accompaniment. Kassoff rejected any comparison to Hamlisch: “I could never fill his shoes,” he stated flatly. Liz Callaway, perky, worked the stage on the good gams revealed by her black mini-dress. Callaway’s offering was Hamlisch & Sager’s “Ice Castles.” Lisa Vroman, her red hair mirrored in a shimmering gown of the same shade, brought good voice to two by Cole Porter. Saxophonist Dave Koz, visually moved to be honoring Hamlisch The Giant, kicked in a swaggering “Nobody Does It Better.”

Violinist Anne Akiko Meyers, both beautiful and tall in a green strapless gown, delivered Charlie Chaplin’s plaintive “Smile.” She then summoned celestial and bluesy tones from her fiddle in Gershwin’s “Summertime.” Gorgeous.

M.C./pianist Marc Chaiman’s wonderful song-based schtick went like this: “I always wanted to be the gay Marvin Hamlisch. I got the gay bit down, still working on the rest.” Ba-da-boom.

The superb evening completed a swelteringly hot September Saturday. But it bubbled along on sparkling rosé, the evening’s  specialty cocktail. I would have liked the Pasadena’ites to acknowledge the Pittsburgh Pops and National Symphony where Hamlisch served longer and developed his pops chops. It would be hard for those guys to galvanize as star-studded a show and they’re in mourning too. But in faraway mountain-edged Pasadena, the Ambassador Auditorium campus seemed to levitate magically in the night air, like a cool island of musical joy.