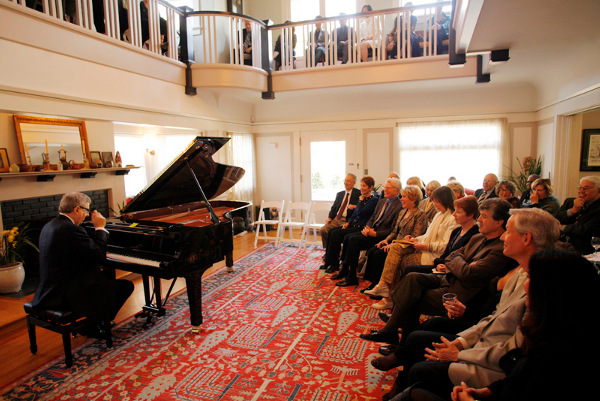 “I love Pasadena,” proclaimed the new conductor of the Pasadena Pops, Marvin Hamlisch. The award-winning film and Broadway composer is  perfectly suited for the family-oriented position because, for one thing, he’s no shrinking violet. With a portfolio studded with mega-hits for Broadway (“A Chorus Line”) and Hollywood movies (“The Way We Were,” “Sophie’s Choice,” “The Sting”), Hamlisch also treasures bringing music alive for live audiences. “I like the idea of being around talent in L.A. and Hollywood. We can take from the community.” 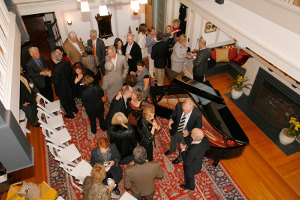 The Pops, which performs summer concerts on the Rose Bowl lawn in the Arroyo Seco, surprised and delighted music lovers last August with Hamlisch’s appointment. It was a mighty coup hiding in plain sight.

At a recent Sunday afternoon fundraiser at the historic home of Craig and Carolyn Watson, the tall music maven charmed a group of Pasadena Symphony & Pops patrons. Deftly working the room. Then he tickled the ivories, even crooning, in a private concert.

The event took place just hours before the Academy Awards broadcast, a fact not lost on Hamlisch. Taking his seat at a baby grand (especially installed for the occasion), he kibitzed, “When you lose an Oscar,” he explained, “you try to understand what company you are in.” 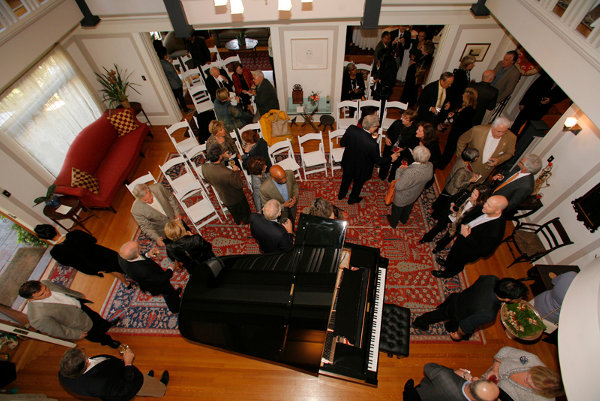 Hamlisch then turned to the winners. First, Jerome Kern’s romantic ballad, “The Way You Look Tonight”; then Hollywood’s national anthem, “Over the Rainbow”; followed by “Zippety Do Dah”; and “Three Coins in a Fountain.” He hit the room’s collective heartstrings with renderings of “Gigi” and “Moon River.” Again he topped the set with one of his own, “The Way We Were.”

Honoring Scott Joplin, whose ragtime romps reemerged into American popular culture when Hamlisch adapted them for “The Sting,” he noted that he only played this music because the movie carries special meaning for him: “I was body double for both Newman and Redford,” he quipped.

Taking a serious tone, Hamlisch said, “I’ve been doing Pops concert for twenty years (lately in Pittsburgh). It’s a great gift for a family.” He then made a plaintive plea for music education in schools.

In a private conversation with artsmeme on the same subject, Hamlisch expressed consternation: “We have kids growing up in a world where they don’t know Gershwin. I think it’s important for that to happen. We should do it so kids of today know the heritage America gave to the music world.”

Paul Jan Zdunek, the organization’s CEO said, “We’ve been going through a transition. Instead of circling the wagons, we made bold moves. Our symphony is resident orchestra at the Ambassador Auditorium. Our musicians are among the most sought-after studio orchestra members in film and television.

“And in Marvin Hamlisch, our new principal Pops conductor,” he said in a proud tone of voice, well warranted, “we have an Oscar, Emmy, Grammy and Pulitzer Prize winner.”

Mr. Zdunkek forgot two  — Hamlisch also has a Golden Globe and a Tony~!