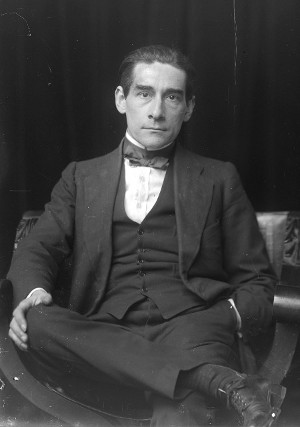 And it all has a Los Angeles connection.

arts·meme friend, Graham Howe, who divides his time between Sydney and Pasadena, is a distinguished photography scholar who happened upon, and acquired, a lost trove of Hoppé prints and negatives in London. He now manages the E.O. Hoppé Estate Collection as the CEO of museum services organization, Curatorial Assistance, in Pasadena.

Hoppé photographed many in the Ballets Russes contingent (famously, Tamara Karsavina) during the company’s London seasons, which ran from 1909 until 1921. He was keen on capturing Nijinsky, but pinning down the elusive Russian proved tough sledding. Hoppé tells the story, in his own words, of eventually photographing Nijinsky on an impromptu basis, backstage, after a performance of Spectre de la Rose.

You can read Hoppe’s memoir, and view the Nijinsky photos on The Huffington Post.

The photos give jarring insight into Nijinsky, the man. In them, Nijinsky looks dazed, out of it, certainly in a zone. These shots exist in stark contrast to his much more posed, polished, iconic images; however disturbing, they’re real. Also interesting is seeing Nijinsky’s sister, the choreographer Bronislava Nijinska, pose in “Spectre”‘s  female role, a part highly identified with Karsavina.

Life is so funny. I’d read the words “Spectre de la Rose” so many times, but never expected to actually see the ballet. But the Boston Ballet, in its 2009 Ballets Russes centennial celebration, restaged it and there, I finally viewed Fokine’s amazing work. It was beyond my expectation, fantastic, melding thrillingly with the Von Weber music. And when the Spectre made his exit out an open window  — Nijinsky’s gasp-inducing leap — I felt his spirit in the theater. Spooky, marvelous, shattering.