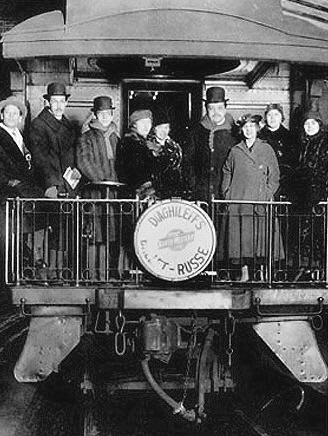 We celebrate the exquisite legacy of the Ballets Russes, a phenomenal ballet troupe that debuted in Paris one hundred years ago.

Theodore Kosloff, my subject in the Los Angeles Times and on arts•meme, was a first-generation member of Ballets Russes. Kosloff’s story piqued my interest (a polite way of saying “I’m obsessed!”) to attend the “Spirit of Diaghilev” conference at Boston University. The three-day centenary event focused on the famed Russian-born impresario who made it all happen.

The aesthetic revolution that Serge Diaghilev cooked in Paris in the early twentieth century was a magnet for Imperial Ballet-trained dancers escaping the chaos of pre-revolutionary Russia. Residing in transient hotels in Paris and the south of France, this floating crew of creatives worked under the most tenuous and insecure of conditions. And yet, their results not only endure, but inspire awe.

To create the dances for this glamorous posse, Diaghilev engaged five choreographers over the course of twenty years. This quintet now occupies a permanent spot in choreography heaven as classical ballet’s A-team. Explaining why at the Boston conference was a panel of the nation’s top dance writers.

Fokine’s brand was the high degree of intimacy he created with music, as well as the unprecedented psychological truth of his choreography. He pulled from his dancers performances that etch ballet history’s most memorable characters: a dying swan with undulating arms; a broken puppet-man in Petrouchka; the exotic golden slave of Scheherazade; and an unattainable femme fetale Firebird.

Casting these crystalline characters into vivid scenarios with no deficit of bodies on stage (94 in Petrouchka, all with distinct choreography) Fokine created works across genres: from pure movement, to Russian folk tale, to ballets d’atmosphere.

By closing his ballets in ambiguity — a touchstone of modernism — Fokine innovated, according to Macaulay. 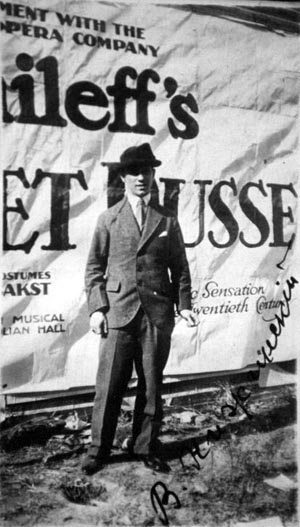 Poor Nijinsky. During his decade-long splash as the world’s most sensual and emotionally present male dancer, he also tried his hand at choreography — with mesmerizing results.

Then he went crazy.

“Genetically loaded” for schizophrenia, according to Joan Acocella, dance critic for The New Yorker magazine who also edited Nijinsky’s diaries, the child-like, naive ballet superstar spent his last thirty years on earth in the grip of mental illness.

Before his fall, Nijinsky’s creative output included L’Apres-Midi d’un Faune, an abundantly readable movement-jewel that is seven captivating minutes long. Set to Debussy’s shimmering music and unfolding before Leon Bakst’s art nouveau backdrop, Faune transcends its earthly components. Nijinsky also choreographed Stravinsky’s Le Sacre du Printemps, which caused a riot at its premiere. Nijinsky had to shout counts to his dancers from the theater wings over the din of the catcalling audience.

(I was thrilled to discover that Nijinsky danced in Pittsburgh, my home town.)

Veteran New York Times dance writer Jack Anderson praised the breadth and ambition of choreographer Leonide Massine, whose highlights include Le Tricorne to de Falla, the revolutionary, collaborative Parade, Stravinsky’s Pulcinella and La Boutique Fantasque. Massine’s gargantuan contribution to ballet has sunk into obscurity, says Anderson. Massine’s bad luck was in not hooking up with an institution to maintain his oeuvre. He also may have alienated with what Anderson called his “arrogant, stingy, litigious, and annoying” personality.

Massine was an “infinitely curious” artist , according to Anderson, who loved museums and was a keen life observer. He saw in everything fodder for a ballet, including a bunch of skateboarding kids he watched as an old man. He took on huge themes and assignments, and pulled them off, most famously in his symphonic ballets of the 1930s. This was a choreographer unafraid of sweeping emotion. He also had a deft hand with comedy and character.

Dance critic for the Newark Star-Ledger, Robert Johnson, has a special affinty for choreographer Bronislava Nijinska. His mother, Nina Youshevitch studied ballet with her. Nijinska was not so much a woman in a man’s world … as she was a woman in a world of other women few of whom were decision makers. They were primarily dancers.

Of the five choreographers discussed on this panel, Nijinska provoked the sympoisum’s greatest curiosity. Her two great works, Les Noces, to Stravinsky, and Les Biches, a society satire, are gems. It’s thought that she wielded more influence than she was credited for, and that Balanchine, among others, borrowed her movement motifs. Nijinska was concerned as a choreographer with formal composition and the use of gesture. Relative to her care for geometric form, Johnson associated her with the painter Kandinsky.

* * *
Dance historian Nancy Reynolds, a former New York City Ballet ballerina and co-author of No Fixed Points: Dance in the Twentieth Century, noted that the Ballets Russes experience marked the young Balanchine for life. Of the 11 dances Balanchine made for Diaghilev, two remain as masterworks:  Apollo and Prodigal Son.
In the Ballets Russes milieu, Balanchine encountered several lifelong collaborators. Foremost was Stravinsky. But there was also Pavel Tchelitchev, George Auric, Henri Sauget, Darius Millhaud, and Vladimir Dukelsy (aka Vernon Duke).

Balanchine, uniquely of his fellow five, carried Diaghilev’s great experiment through the century. Ultimately, Reynolds pointed out, Balanchine moved away from the Diaghilev model, eschewing the equal status of set design, and costume to hone in on two key elements: music and choreography.

Reynolds asserted that in the hothouse of Ballets Russes, Balanchine developed his chops for quick invention … and, chafing under Diaghilev’s eagle eye, a determination to be his own boss!