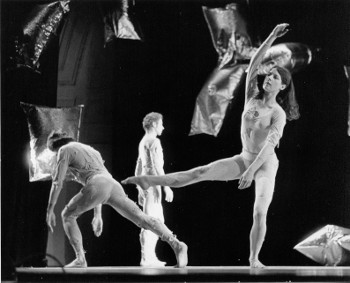 The good news in the dance world is that the Merce Cunningham Dance Company collection of set pieces, costumes, painted drops created for relentlessly innovative choreographer by leading artists, designers and musicians has a loving home.

Alas dance fans will have to traipse to Minneapolis to see the stuff, made in New York City though it was. The art works represent the choreographer’s seminal collaborations with Robert Rauschenberg, John  Cage, Jasper Johns, Andy Warhol, Frank Stella, and Roy Lichtenstein, among others.

The collection will roost at the Walker Art Center, one of the most progressive art museums in the county and an ardent supporter of Cunningham, who died in 2009 after a nearly 70 year career.

It actually makes sense for the 150-object collection to reside at the Walker. 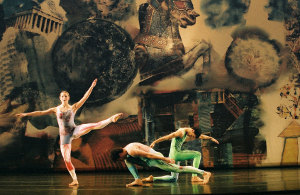 The museum’s relationship with Cunningham dates to 1963, when MCDC first performed in Minneapolis. Since then, the Walker actively supported Cunningham’s work over 45 years through nine residencies, three commissions, an exhibition, and some 17 separate engagements, including three world premieres and two U.S. premieres.

That’s huge. We can’t get a coherent sponsorship of dance, or even an acknowledgment that it’s an art form, from an L.A. museum, by hook or by crook.

The collection’s highlights include Rauschenberg’s combine Minutiae (1954/1976), and Andy Warhol’s Silver Clouds installation, used in the dance RainForest (1968) (pictured above).

Click on all three photos to see details. When you look, try to grasp what this modest and unassuming man from Washington state had the vision to put before his audience. 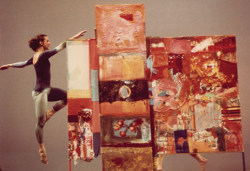 Highlights of the Walker/Cunningham collaboration include the MCDC’s 1969 Walker residency, in which the company performed the iconoclastic Canfield; the 1998 exhibition Art Performs Life, exploring the work and life of Cunningham; Event for the Garden (1998), a special performance in front of Spoonbridge and Cherry by Claes Oldenburg and Coosje van Bruggen to celebrate the Minneapolis Sculpture Garden’s 10th Anniversary, which incorporated dozens of Andy Warhol’s silver Mylar pillows floating in the air around the stage; and Cunningham’s monumental restaging of Ocean (2000), at the bottom of a Minnesota quarry.

The collection will be displayed in November 2011 concurrent to the Cunningham’s company’s last performances at the Walker.