Fly away, String Theory, fly away … 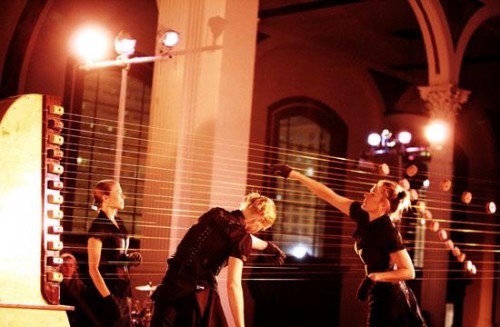 String Theory’s work, “Compositions of Sound and Space,” promises to infuse the plaintive bus depot with a combination of sound sculpture, dance and music.

String Theory is a collaborative ensemble of musicians and dancers that utilize invented instruments and sonic sculpture to create their sonic footprint. Their large-scale performance installations transform environments and architecture into giant musical instruments. Behind the ensemble is instrument designer/builder and composer, Luke Rothschild; choreographer/director, Holly Rothschild; and cellist, composer, Joseph Harvey.

Sounds very good. What matters for Angelenos is that the performances are early, six pm, a good traffic-avoidance time. Also, it’s outdoors — so good for kids.

String Theory has other cool upcoming gigs. They include Yerba Buena Cultural Center Center in San Francisco on October 13. Then the following day, October 14, they join David Byrne and Trent Reznor at the Aratani/ Japan America Theatre in Little Tokyo.