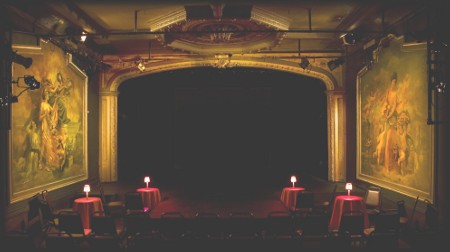 Our story concerns a grand, old New York City structure with a noble track record in art and cultural history. The pink lady in the picture has been home to creative endeavors in music, dance and film. Last year, the exterior of the building receive a $2.1 million restoration as part of the renovations of the East 4th Street Cultural District.

Now home to Rod Rodgers Dance Company and Duo Multicultural Arts Center, 62 East 4th was originally built in 1889 to function as a dance and catering hall. The building has hosted notable artists, including John Philip Sousa, who held meetings of NYC’s musicians union there.

In the 1960s, Andy Warhol rented the building’s Fortune Theater for his film screenings, and in the 1970s Francis Ford Coppola used the theater as a setting in The Godfather: Part II.

Before and after pictures here.