Canapes and CLOCLO made COL*COA cool

No one does it like the French. No one, no way, no how.

COL*COA (City of Lights*City of Angels), the annual French film festival in Los Angeles, just wrapped up at the Director’s Guild of America building on Sunset Boulevard. The festival, now in its 16th year and masterminded by the incredibly hard-working Francois Truffart, offered many small pleasures — and they all added up.

An insanely delicious opening-reception party got things off to an excellent start. There were any number of ways you could ramp up your cholesterol — here a quiche, there a paté, and then there were delicate wafers on which balanced heavenly little balls of vegetable mousse. This ne plus ultra of canapés would basically have sex with your mouth. To wash that down — although why would you want to? — champagne by Nicolas Feuillatte. Packed into the DGA lobby, speaking a mile a minute in their wonderful-sounding language, were legions of French visitors and expats. 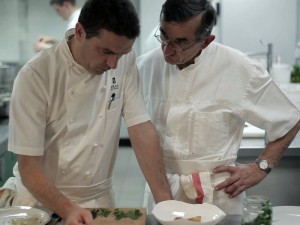 Apropos, I loved the rapturous food doc, “Step up to the Plate,” a paean to French cuisine, culture, and family. The film concerns a legendary chef, Michel Bras, handing the keys of his two extraordinary restaurants (one in southwest France, the other in Japan) to his son. The film’s subtext — French refinement, precision, and quality. Loved it. Poetic.

“Michel Petrucciani,” which as a jazz devote I should gobble up, made me uneasy. Petrucciani, the dwarfed jazz pianist who died in 1999, was an unnatural artist. I found his voracious musical outpouring unsettling. Having said that I would not miss any jazz documentary, and there is a lot of great music footage in this film, especially the scenes with saxophonist Charles Lloyd with whom Petrucciani was associated.

I saw three films by female actor/directors. Both Melanie Laurent’s “The Adopted” and Julie Delpy’s “Le Skylab” had bits and pieces of interest. With “Adopted,” I didn’t really buy the bookstore romance and I can’t stand coma movies. It strikes me as lazy screenwriting. “Skylab” had insightful, well-acted sequences, in particular the director’s fine-tuned and amusing observations on adolescent love. But altogether, no one really needs this movie. Delpy perhaps should not have appeared in it. Maiwenn definitely should not have appeared in “Polisse.” Her presence as a nerdy photog snapping verité-style shots of a Paris police child-molestation unit tarnished her own ambitious movie. But at least “Polisse” attempts to depict the real world, whereas Delpy’s deeply conservative film, a flashback to a family reunion in Brittany, is not very useful. Who cares about her quirky family in 1979? I had my own quirky family in 1979.

“Americano,” directed by cinema prince Mathieu Demy proved that much more of a disappointment coming from the offspring of two great filmmakers, Agnès Varda and Jacques Demy. Demy, Jr.’s film, too, could have been better sans lui. “Americano” rests on clichés of south-of-the-border road-trip debauchery. Identity loss and nihilism in Tijuana. We in Los Angeles are over that. But Selma Hayak survives intact. She’s a good movie star.

“The Intouchables” (is that a word in English?) which won the festival audience award, yet another coma movie insofar as one of the lead characters, wheelchair-bound, is out of full action. Couched in comedy, the film sets race relations back a good half-century. Formulaic and subtly offensive, the film takes as its comic premise the audacity of a black man stepping foot into a tony arrondissement (hilarious right? no). He’s a caretaker for a wealthy quadriplegic and the stereotypes abound. High art (classical music, opera, art gallery world) versus the street art of the ‘hood provides low-hanging fruit. The film’s racism strikes me as France’s problem, not ours, but thanks to Harvey Weinstein picking it up for U.S. distribution, we get to partake in it. I would like to hear Spike Lee’s take on “Intouchables.” If it’s okay with him, it’s okay with me. I guess. Comedy is hard, and it’s cultural. 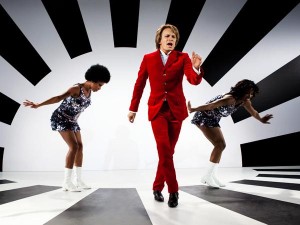 It was interesting to note the gap between films that dealt with reality (viz., that France is struggling with incorporating minorities into its mainstream) and those with their head in the sand. The best of the escapist fare was CLOCLO (“My Way” in English), an eye-popping, color-drenched biopic of the uber-blonde French songster from the seventies, Claude François.

I just loved it.

From its opening scenes depicting François’s expatriate-childhood in Egypt, the film cruised through unexpected set-ups and scenarios, in a tone unfamiliar to me in French cinema. That is to say, the film was tremendously open-hearted, accessible, and audience friendly. It didn’t hold back and I found CLOCLO’s joyous and transparent tone very appealing.

What was so fabulous about this film (it runs 20 minutes too long) is not that François wrote “Comme d’habitude” the footprint for Frank Sinatra’s anthem, “My Way.” It’s the kooky portrait of a control freak. I loved the brilliant way the lead actor Jérémie Renier worked this idea. I cannot recall a similar portrayal of an obsessive-compulsive (Citizen Kane comes to mind!); it felt extremely fresh. When the film wound down, the first thing I did was poof up my hair with a brush as Renier’s bouffant is so impeccable throughout. I found the film a huge fun ride and I enjoyed learning to not screw in a lightbulb while I’m taking a shower. That could come in handy! I hope you can soon enjoy “CLOCLO” in your local cinema.

Over the course of the Fest, I missed several key biggies, the Meliès “A Trip to the Moon” and the doc about it, “The Extraordinary Village.” I missed “Hotel du Nord,” the Marcel Carné classic from 1938. I left Benoit Jacquot’s “Farewell My Queen,” highly lauded as a masterpiece but the subtitles were out of sync with the soundtrack and my addled brain could not tolerate it. I heard that “Louise Wimmer,” about a homeless woman living in her car, was good, as was “The Well Diggers’ Daughter” directed by actor Daniel Auteuil, recco’ed as a top-notch French paysage movie.