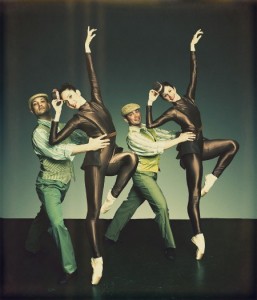 On a recent visit to New York, it was my great pleasure to sit in on a rehearsal of a new work by choreographer Marilyn Klaus. She was preparing the latest addition to her roster of thirst-quenching ballets based on a cocktail menu. Thus the name of Klaus’s boutique troupe, “Ballets With A Twist.”

By serving up drinks right on the spot, Klaus preempts the mad dash to the bar after the show. The company’s standing-room-only showcase at Lincoln Center’s David Rubenstein Atrium, in August 2011, left a queue wrapped ’round the block. Now she’s adding a new beverage to a repertory line-up that already offers the Martini, Mai-Tai, Margarita, Manhattan, Shirley Temple, Gimlet, and Roy Rogers.

In the kind of film world/dance world mash-up that we like to see, “Mint Julep”‘s premiere will take place at the Tribeca Film Festival on April 28, 2012.

Now, we all know that film geeks start drinking early, but this may be taking it to extremes. The show starts at 10:15 am!

Klaus’s horsey affair draws from all kinds of inspirations — the pony-tailed ballerinas of the 1950s and Greek centaurs come to mind. But primary motifs draw from the Kentucky Derby. That’s visualized with consummate chic by designer Catherine Zehr‘s green-and-brown costumes, with pink plaid accents. The men don stable-boy gear. Debonair little riding hats top off the ladies’ heads. The ballet’s duets illustrate a consummate love connection — the one between a horse and its trainer.

The refreshingly forthcoming Klaus chats during rehearsal without peeling an eye from her dancers. “I love to drink,” she admits, of course with a laugh. Combining this avocation with her vocation, she launched her highly marketable, themed company.

One of her lead fillies burbles by in an airy embôité jump-step. Seeing it, the choreographer’s face softens to a smile. “Yes,” she calls out, encouragingly, “So light!”

Instructing another mare to perch with pointe shoe in a forced arch, she says, “Stay there … like an old fashioned ballet.” Indeed, Klaus, who grew up in Los Angeles studying with top ballet teacher Carmelita Maracci, forges a sensibility that unites the retro, the chic, the feminine, and the Hollywood.

A set of junior prancers charges by. One of the two children hesitates, stumbles, then pouts. Klaus warns her sternly, “Just do it. I don’t want to hear about it.”  So ’round and ’round the racetrack the pony trots.