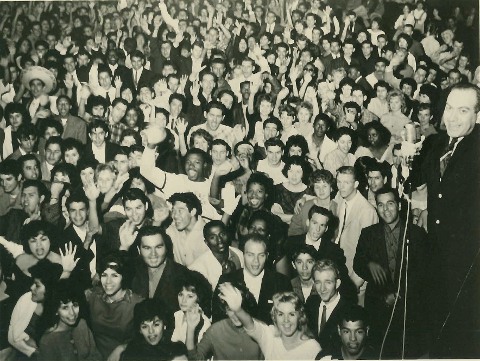 We enjoyed meeting the amazing Los Angeles radio legend, Art Laboe, Wednesday night at the Grammy Museum downtown. Laboe’s a pioneer in many ways — issuing the first-ever record compilations and coining the expression “Oldies But Goodies.”

The deejay is very much alive and kicking; though in his eighties, he was in great shape cruising the opening of a new show, “Trouble in Paradise: Music in Los Angeles 1945-1975.” Co-curated by the USC professor and cultural anthropologist, Josh Kun, and Tori Millimaki, the show addresses a huge sprawl of musical genres — surf rock, jazz, R&B, Laurel Canyon folk rock, the Sunset Strip rock scene and the East L.A. Chicano sound — what a broad swathe! Installed in three large areas of the Museum’s fourth floor, it recycles fun memorabilia (we like the album covers lent by night club expert Domenic Priore) covering a 30-year window that coincides with the time frame of the Pacific Standard Time regional arts festival.

The stuff on Laboe was a high point for this non-native Angeleno, particularly the show’s inclusion of the glorious multiracial dance-party photo above.

[Both big photos are clickable.]

Still a ball of fire and surrounded an entourage of attractive women, the legendary deejay chatted with us prior to trotting off for his nightly syndicated radio program [airs on Hot 92.3, 7 to midnight M-F and Sunday 6 to midnight.]

From approximately 1955 to 1959, Laboe hosted teenage dance parties at the El Monte Legion Stadium, where so much rock history occurred. [I knew of it as a lyric from “Dog Breath,” Frank Zappa’s paean to his southern California teenage years.] 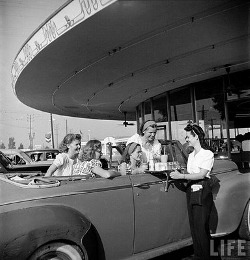 Laboe explained, “Teens weren’t allowed to go to public dances unless they [the dances] were sanctioned by the School board. That was in the city of L.A. That’s why we went to a different city, where L.A. had no jurisdiction. Saturday nights we were in El Monte, then we went to Huntington Beach, Southgate, Long Beach and Beverly Hills. And Anaheim.

When I mentioned to Laboe that he looks pretty happy in the photo, he retorted without missing a beat: “Three thousand kids and I had a piece of the action. Of course I was happy.”

He then described his afternoon KPOP broadcasts. “We did it from the drive-in [restaurants]. The kids would get out of school. Hamburgers. Cokes. We started at three pm and we’d go around till six.

“I would walk around [the parking lot]. I ‘d put these kids on the air. Dedications. It was the Scrivner’s drive-ins . I was the roving disc jockey. I roved different drive-ins. First there were five. Then there were 12.”

Another fantastic photo, below, in which Laboe interviews teen crooner, Ricky Nelson, amidst a gaggle of girl fans. 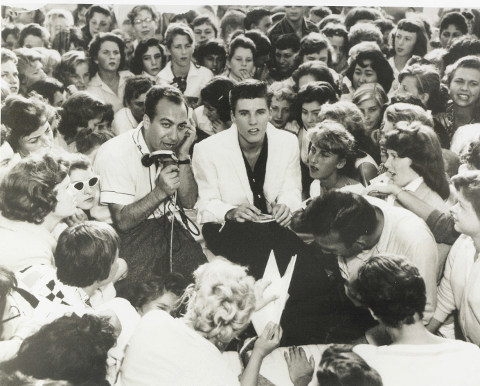