October 23 is as good a day as any, no better, to trek to the deep San Fernando Valley. On that Sunday, the campus of Cal State University, Northridge, will be super alive in an extraordinary double-bill highlighting the best of African-American art. Then we’ll do an arts-march across campus to the jewel-box Valley Performing Arts Center (designed by a talented female architect, Kara Hill, it’s still in its inaugural season), where a celebration of jazz trumpeter Miles Davis kicks into gear at 6 pm.

Miles was not a son of Los Angeles, rather, of St. Louis, but what can we say? His oeuvre, in all stages and permutations, is central to the spirit marked by Pacific Standard Time. His tough, alienated personal style, lonely existential tone, rejection of musical fillip, or of anything extraneous — all fits so well with the post-war zeitgeist. 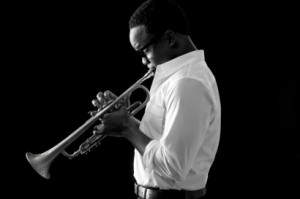 Come on, Miles Davis, who died in 1991, was for decades a leading beacon of what is hip. So it should be really interesting to see the young trumpeter, Ambrose Akinmusire, 29, who’s heading up the tribute program, interpret him.